Let me take you on a little mystery that filled me with big wonder, inspiration and happiness.

It goes back to July of 2017 when I was naturalist around Haida Gwaii with Maple Leaf Adventures.

Let’s make it a photo essay.

To set the stage, here’s the boat and the crew. 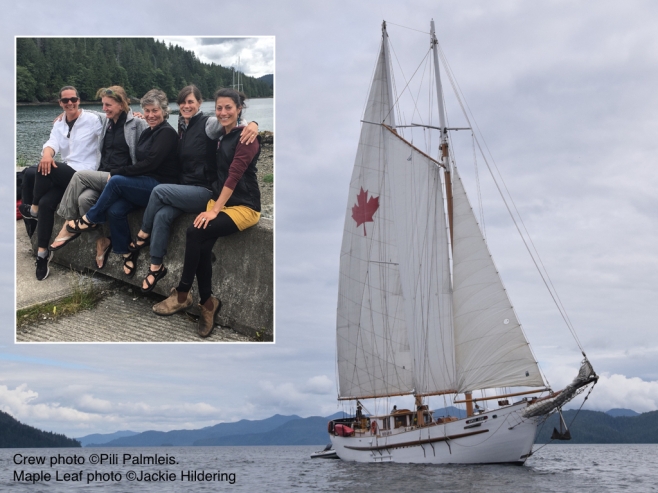 You’ll note that the beautiful, historic sailing ship was operated by an all female crew on this trip. Important to note? Yes, but let me not digress.

Here’s the beach at Woodruff Bay near Cape St. James.

The discovery was made by the child I was so glad was on the trip.

Like any smart, curious and observant young person would, she asked what had made the crazy, convoluted patterns in the sand.

I didn’t know what species had made those remarkable, dizzying tracks. But, the best things had come together – a mystery, a child, and the chance to discover the answer together.

We struck out to solve the mystery and found lots of little clam shells near the tracks. We looked more closely at the tracks.

And found the tiny clams IN the tracks.

And then we noted what they were doing. They were licking the sand!

We had found the animal that was making the tracks and concluded the tiny clams must be feeding on organic material in this way. It is known as “deposit feeding” whereby the bivalves use their inhalant siphons to sweep the sand for detritus and microbes = snacks.

We were in awe at thinking of how much sand they must process to leave such long individual tracks and that they must be doing this quite quickly.

Upon returning to the ship, I was able to use the resources there to determine that the tiny clam was some species a “Tellin”.

However, it took my emailing my mollusc expert friends to have the species of Tellin confirmed.

Naturalist supreme, Bill Merilees, let me know I had “met British Columbia’s most beautiful clam Tellina nuculoides, the Salmon Tellin.” He also shared the results of his work to study their growth rings (imagine the dedication needed to count the growth rings of a large sample of tiny clams.) Bill’s research suggests Salmon Tellins can live to age 11 or 12.

Armed with their species name, I was able to find out a bit more.Their maximum size is 2 cm and their range is from southern Alaska to northern California. I presume the “salmon” in their common name refers to their beautiful colour.

I became even more awe-inspired to learn that research supports that bivalves like Tellins select particles based on physical and/or chemical properties that are poorly understood! (Source: https://doi.org/10.1016/j.jembe.2004.03.002.)

Imagine THAT while you watch my blurry video of the Salmon Tellins licking the sand.

To conclude, I will resist all the puns I could be using to be “tellin” it like it is. (Oops, clearly I am not entirely successful in resisting.)

Rather, I will share the quote with which mollusc expert Rick Harbo responded when I asked him about the species and their tracks.

He reflected on the tracks made by mollusc species who feed in this way with the words of Gandalf from Lord of the Rings  . . .

“All who wander are not lost”.

The happiness that comes with connection to nature and making discoveries – Kay with a boa of “Feather Boa Kelp” that had washed onto the beach. Be on the lookout for Salmon Tellins on a fine sand beach from Alaska to California. Note that other mollusc species (and worms, some sea slugs, etc) also leave tracks in the sand. More on other trail-blazing species in the future.