It was on July 16th, 2010 when I saw Sperm Whales for the first time off the coast of British Columbia and my world rocked.

This whale species is unlike any other and is extreme in so many ways.

I saw the Sperm Whales while having the joy of being a Marine Mammal Observer on DFO’s Cetacean Research Program’s offshore survey. I first saw them in the area where I have put the blue star on the map below. You’ll note from this image that this area off the continental shelf is where many sperm whales were “taken” by whalers. It is in deep waters like this that sperm whales find their prey of deep ocean fishes and squid (from medium-sized squid species to the giant squid).

Sperm Whales inshore of Vancouver Island are exceedingly rare. There was one documented in February 2018 near Telegraph Cove by Lisa Larsson of OrcaLab and Jared Towers of DFO. In late fall of 1984 Dr. John Ford of DFO recorded the clicks from one in Johnstone Strait near Telegraph Cove (source: Ford, Marine Mammals of British Columbia).

Our first clue that we might be sighting Sperm Whales was the very unique blows that veer sharply off to the left. Through binoculars we could confirm the species ID by seeing the animals’ colossal heads and wrinkly skin and, when they descended for a long and deep dive, it was indisputable that we were seeing Sperm Whales. The distinctly shaped tails came high out of the water, straight up and down and the animals descended as if slowly going down in an elevator. I found myself gasping in amazement when I first saw this. (Note that the images below showing the Sperm Whale’s dive and blow are not from the research trip in B.C.)

Apparently an average Sperm Whale’s dive profile is to slowly descend for 10 minutes, hunt at depth (more often at 300 to 800 m) for approximately 25 minutes, then slowly ascend for 10 minutes. The whales then stay at the surface for some 8 minutes, taking up to 90 breaths (range of 20 to 70) to offload carbon dioxide and reload oxygen into their blood and muscles.

This long period at the surface is when they were an easy target for the whalers. Yes, Moby Dick was a Sperm Whale but the ferociousness portrayed by Herman Melville in this classic novel is pure fiction. Were Sperm Whales to attack and swallow people whole, they may not have been so terribly exploited. We humans wanted their blubber, their spermaceti and their ambergris. Ambergris is found in the intestines (see previous blog item) and “spermaceti” is a semi-liquid wax found in the Sperm Whales’ huge heads. Early whalers thought it was a reproductive material which is why the species has its strange common name. Science now believes that this material has a role in buoyancy by being cooled and contracting to become more dense when the whale is diving and then becoming heated and expanding to allow the whale to ascend from such great depths. It may also have a role in sound production.

In the dark world to which the Sperm Whales descended, they find their prey through echolocation. These clicks act like an “acoustic flashlight”. They go out from the whale’s huge head and, when they bounce off an object and “echo” back, this allows the sperm whale to form an image of its surroundings and prey. (I also provide a weblink below that provides amazing, but very worrying, video of a Sperm Whale using echolocation to take fish off a longline = “depredation”).

As well as these slow and regular echolocation clicks, Sperm Whales also make really loud clicks called “codas”. Codas are believed to allow the Sperm Whales to communicate with one another, maybe in a way like we humans use Morse code. Listen to the Sperm Whale that was in Johnstone Strait in February 2018 at this link.

I don’t know that anyone can be quite the same after an enormously privileged experience like seeing a Sperm whale. I was left stunned with a cocktail of emotion surging through me that included wonder, joy, passion and resolve. More passion for conservation and more resolve to share these experiences to make them count. 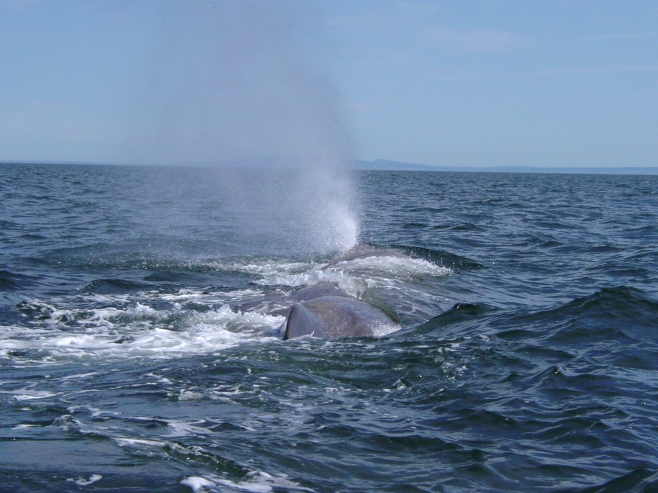 Many thanks to Peter Jucker and Uko Gorter for their great generosity in sharing images for the purpose of education and conservation. 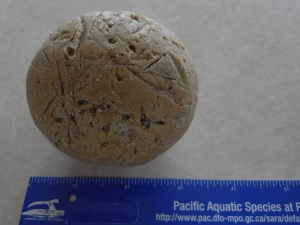 Recently, I was contacted by a local family about their very unique find on a beach on Southwest Vancouver Island. Their email had the entertaining subject line of “Whale Puke – Hopefully?” and contained pictures of what they had found.

I was amazed at how they had narrowed down what the strange looking masses might be  . . . ambergris (pronounced “amber-grease”; from the French for gray amber), a substance produced in the intestines of sperm whales.  And . . . ambergris is extremely valuable; apparently worth up to $20,000 USD per kg. It has a musky, very distinct odour and has been used in perfume as a fixative (to stop it all from evaporating quickly). It has also been used as food flavouring and medicine.  Apparently it was even believed to cure the plague.  Yes, sperm whales used to be intensely hunted and the hope of collecting ambergris was one of the reasons why.

The sperm whale is the largest toothed whale species. It has a head up to 1/3 of its body (Physeter macrocephalus = big head) and can dive to depths of 3,000 m. We humans have so much to learn about whales that are far less deep diving.  You can imagine what knowledge gaps there are for an animal that dives to such great depths and for so long; up to about an hour. (Click here for a detailed “The Marine Detective” posting on the sperm whale).

So how and why do sperm whales create ambergris?

It is believed to be caused by the beaks of the giant squid irritating the sperm whale’s intestines. However, ambergris may not be “whale vomit” at all, but rather, it may come with “whale poop”.  Apparently, when “fresh”, ambergris smells more like it comes from the anus. Some scientists believe it does get regurgitated (vomited up) if the piece is particularly large.

Was the family’s mysterious material the highly valuable ambergris? It seemed possible. We have sperm whales off the B.C. coast and the material was resinous, less dense than water and looked like some of the images of ambergris I could find online.

They found two masses, each about the size of a goose egg.  They dropped one and it fragmented and crumbled, some pieces darker and clearer than others. But, there were no bits of squid beaks nor was there a really distinct musky odour.

I wanted to be sure, so I contacted the wonderful Dr. John Ford, DFO’s head of Cetacean Research at the Pacific Biological Station in Nanaimo. He very kindly relayed a test that would prove whether it was the highly prized ambergris – or not.  If you heat a wire or needle to red hot and stick it into ambergris to about a centimetre’s depth, it melts into an opaque liquid the colour of dark chocolate and leaves a tacky residue on the wire/needle.

When I carried this out, the material did melt and leave a residue but it was a lighter brown material. It did not melt like chocolate. There was a distinct sizzling sound and a small puff of smoke. There was still no distinct musky odour.

So what could it be?  I decided to take about a teaspoon of the crumbs and melt them down and, when I saw the result, I had an idea.  The material was oily, it melted easily, it had small dark flecks in it. Why – it looked like used cooking oil!

Not ambergris but – cooking grease?!

It’s my best guess to date.  That a boat somewhere out a sea, dumped cooking oil. It solidified and got rolled around on the beach, rounding it and pitting it. Why were there two masses of about the same size? I have absolutely no idea. Stay tuned and feel free to offer any hypotheses.

Click here for photos of the mystery substance and the results of the diagnostic tests.

Click here for my bundling of links  on B.C.’s sperm whales – includes video, sounds, information about the historical whaling of sperm whales and articles about ambergris.

Article related to finding a high-quality synthetic alternative for use in perfumes.  UBC Press Release: April 5, 2012; “How to make high-end perfumes without whale barf”