See the juvenile here to the right of my buddy Natasha? There, right beside the mating Yellow-Rimmed Nudibranchs. This Sunflower Star was in just 5 metres of water.

Today’s two Sunflower Stars are the first I have seen in twelve hours underwater over the last three months and believe me, I have been looking. I only saw one before that. They are such a rarity now. Will these two survive? I have seen waves of juveniles before and then they disappear. Their plight appears to be linked to climate change.

Please hang in there. Please read on.

I have been struggling too, looking for escape / reprieve from global realities as another “atmospheric river” is forecast to fall on parts of our province. It is so tempting to want to hide especially if we see the problems we are facing as disparate. They are not.

I have had to remind myself of the common solutions so that I see a way forward that is not guided by the faintness of blind hope; paralyzed by fear and overwhelm; and / or obfuscated by the din of values and voices that serve the few for a brief time.

Common solutions include: to know, live and share the GAINS that come from using LESS (fossil fuels, dangerous chemicals, disposables, less consumerism generally); to speak for truth and science and to have compassion for those who cannot; to exercise our power as voters and consumers to serve future generations; and to care and act on the knowledge of connection to others – across time, cultures, distance, and species.

In short, it’s a really good time to be a good human.

I had to dig for these words for myself. As always, may they serve you too.

Photos: November 21 in Kwakwaka’wakw Territory near Port Hardy at a site where I have been monitoring sea star since 2013, ©Jackie Hildering.

For those who are not yet aware, I include the reality of Sea Star Wasting Disease (SSWD) below. A link to a summary of the research and where to report sightings is in my blog at this link.

Since 2013, more than 20 species of sea star have been impacted by SSWD from Mexico to Alaska. There is local variation in intensity of the disease and which species are impacted. It is one of the largest wildlife die-off events in recorded history. Sea stars contort, have lesions, shed arms, and become piles of decay.

Currently, some species of sea star appear to have recovered while others remain very heavily impacted. Sunflower Stars (Pycnopodia helianthoides) have been devastated and were added to the International Union for Conservation of Nature (IUCN) list as Critically Endangered. There are current efforts to have Sunflower Stars assessed by the Committee on the Status of Endangered Wildlife in Canada (COSEWIC) with hopes that they receive protection under Canada’s Species at Risk Act.

There is NOT scientific consensus about the cause. Current hypotheses focus on (i) a virus and (ii) low oxygen at the surface of the sea star’s skin maintained due to bacteria. What is consistent in is that changing environmental conditions appear to allow the pathogen (be it bacteria or viruses) to have a greater impact.

The best current source for a summary of the research is Hamilton et al (August, 2021). From that source: ” . . . outbreak severity may stem from an interaction between disease severity and warmer waters” and “Though we lack a mechanistic understanding of whether temperature or climate change triggered the SSWD outbreak, this study adds to existing evidence that the speed and severity of SSWD are greater in warmer waters”.

What I believe to be the reality off the coast of British Columbia is that there are refuges of Sunflower Stars at depth where it is colder. They spawn with some young then settling in the shallows where they may succumb to the pathogen if stressed by warmer water.

[If you are coming here from Instagram, please see this link for background on Sea Star Wasting and where to report sightings.]

Endangered? I gasped when I saw this adult Sunflower Star on my last dive and hung nearby for a little while. I found myself thinking in a way that could be interpreted as prayer.

Did you realize Sunflower Stars are now so rare – these giants that should be abundant on the coast from Alaska to Mexico? Endangered? Many of us who have been monitoring Sea Star Wasting Disease since 2013 certainly think so and there is a campaign in Washington State to have them recognized as such.

There has been such misunderstanding and “ocean blindness” about what has been going on. Even reputable news outlets have put into the world information about the Disease that speaks of sea stars as if they were one species and hence, if some sea stars are sighted, well then everything is fine.

It’s not fine. At least 20 species of sea star have been impacted by Sea Star Wasting Disease. Some are recovering well but . . . this the world’s largest sea star species, the Sunflower Star, Pycnopodia helianthoides, is NOT.

We sometimes see waves of juveniles, maybe resulting from more adults being at depth who are close together enough that when they broadcast spawn,  fertilization results (broadcast spawning is when males and females release their sex cells into the water on cue). But, ultimately these juveniles disappear.

Sea Star Wasting Disease (SSWD) is the largest wildlife die off in recorded history. That be truth. But because it is happening below the surface there is less engagement, funding, and knowledge.

Does it matter? Yes, it matters a lot, ecologically and with regard to what the Disease may teach us.

Sunflower Stars have a similar ecological niche to Sea Otters re. grazing on urchins and maintaining kelp forests (see video below). You know that if Sea Otters were dying en masse we would certainly be engaged, invest in research, and want knowledge.

A close-up of the same individual.

What is the cause? Specifically for Sunflower Stars, it is known that there is a virus that has been around for more than 70 years that, since 2013, is having an unprecedented impact .

Why would a virus that is not new be able to have a greater impact? Due to stressors and yes, these are believed to be related to climate change.

To those wonderfully engaged humans who have read all of this, please know this is not an additional problem that requires novel solutions. You are the last people who I wish to burden, you who care as you do. The plight of Sunflower Stars is a symptom of what is the same set of problems re. short term economies, absence of precaution, fossil fuel use, and consumerism.

Reporting sightings? I have reported the sighting of this lone, adult Sunflower Star to add to the knowledge of the impacts of SSWD. Citizen science is so important to understanding. Further information on the Disease and where to report sightings of sea stars can be in my blog at this link.

And to you dear Sunflower Star,
May you find another of your kind for the sake of biodiversity, ecology, human learning and understanding, and so that your species will not disappear from children’s drawings of life on our coast.

May it not be that we continue on a path where Sunflower Stars slip away from our memories, or that we end up talking to children about “There used to be these giant, colourful sea stars . . .” 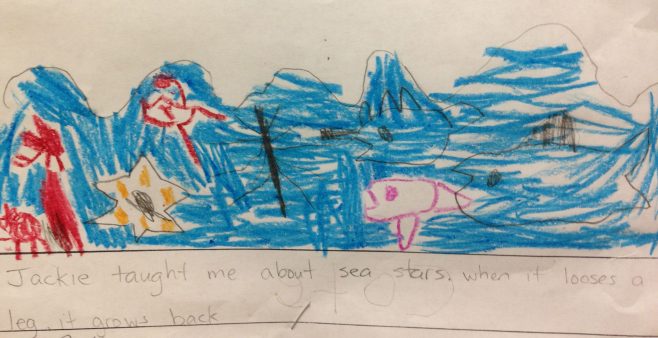 Sighting was made on June 15th, near Port McNeill.

Video below re. Sea Star Wasting Disease and ecological impacts.