These are the most surreal looking organisms.

They are octocorals – colonies of 8-tentacled polyp-like animals. The polyps filter feed on plankton.

The Sea Whips can reach a height of 2.5 meters (Halipteris willemoesi). Orange Sea Pens can be 48 cm tall (Ptilosarcus gurney).

Information on Orange Sea Pens from the Monterey Bay Aquarium “A graceful creature of the seafloor, this sea pen resembles a plump, old-fashioned quill pen. Its colors range from dark orange to yellow to white. Each sea pen is a colony of polyps (small anemonelike individuals) working together for the survival of the whole. The primary polyp loses its tentacles and becomes the stalk of the sea pen, with a bulb at its base—the bulb anchors the sea pen in the muddy or sandy bottom. The various secondary polyps form the sea pen’s “branches” and have specialized functions. Some polyps feed by using nematocysts to catch plankton; some polyps reproduce; and some force water in and out of canals that ventilate the colony.”

But this may be another case where images speak louder than words.

Please enjoy the following photos and clips of Sea Whips and Orange Sea Pens and . . . the predators that stalk them.

Dive buddy Natasha Dickinson with Orange Sea Pen at full height (up to 48 cm) so that polyps can filter feed on plankton. Photo ©Jackie Hildering. 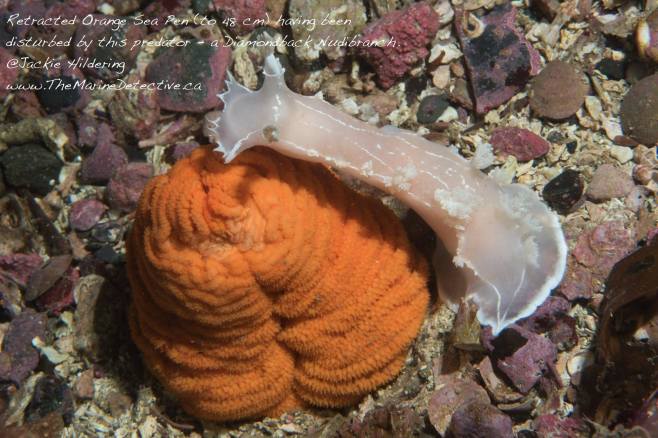 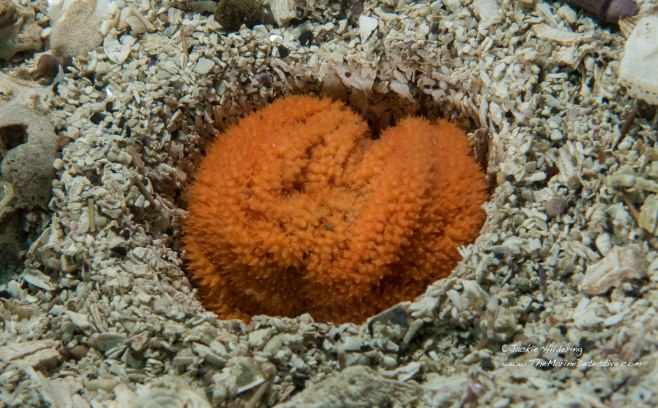 Orange Sea Pen fully retracted into its burrow. For a summary of research into this retraction response to predators see this link from a Snail’s Odyssey ©Jackie Hildering. 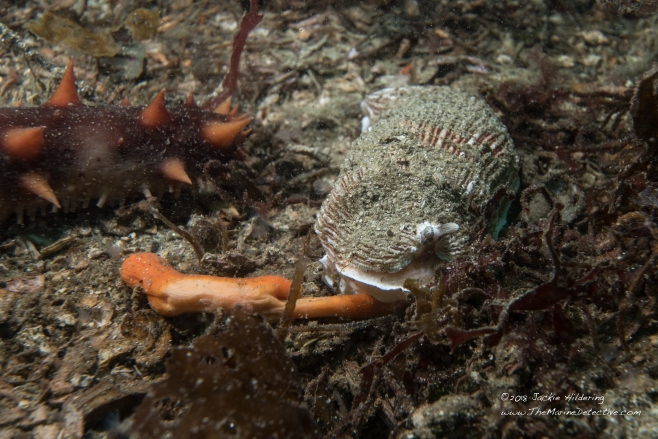 2.5 minute clip below is of Sea Whips and Orange Sea Pens and the predators that stalk them.

Video: 1-minute of an Orange Sea Pen and Graceful Decorator Crab in the current in front of Port McNeill, BC.

Orange Sea Pen that has retracted as a defence to being disturbed by a predator – a Diamondback Nudibranch! Additional nudibranch predators include Striped Nudibranchs and Orange Peel Nudibranchs and small aeolid species like Opalescent Nudibranchs when the octocorals are smaller. Leather Stars and Sunflower Stars are also predators of Orange Sea Pens. Nudibranch species may not only benefit from the nutrients but may also incorporate the stinging cells of the sea pens for their defence. The nudibranchs are able to sense the presence of the sea pens from a distance by scent (using their rhinophores). Sea Stars also prey on Orange Sea Pens. Photo ©Jackie Hildering.

The BBC video below is from SW Tasmania in Australia, NOT Northern Vancouver Island, British Columbia and shows a different species of sea pen. However, I have included it as it shows, with time lapse photography, how sea pens can slowly deflate and retract in response to predation attempts by nudibranchs.