And so it begins.
It’s the time of year when the annual kelps like Bull Kelp begin to break down. It’s then that Kelp-encrusting Bryozoans really get a chance to colonize the kelp as you see in these photos.

Every little box is an individual animal. It’s a “zooid”. The oldest member is in the middle and the others all originated from that one by asexual reproduction.

The zooids filter feed on plankton with the tentacles you see in this wonderful video by friend Karen Johnson. These crowns of tentacles are known as lophophores.

If you are lucky enough to live near the Ocean, look at the kelp that washes ashore for these colonies. The colonies in these photographs where on Split Kelp (Laminaria setchellii) and Bull Kelp (Nerocystis luetkeana).

What on earth is a “bryozoan”?

From Beachkeepers: “Bryozoans are colonial animals that arrange themselves in circular (radial) fashion, often with the oldest (and first to settle) individual in the middle. . . . The ‘box’ of the zooid is made of either a tough protein (like what you would find in crab shells) called chitin, or what you would find in coral reefs, calcium carbonate. This body box has an opening where the bryozoans extend their feeding apparatus (that looks a lot like a sea anemone) called a lophophore. Yes, they have predators! [Some species of] nudibranch will eat them, though they can reproduce asexually to form the colony back to size after a nudibranch has been grazing on them. Sometimes, when they grow back, they’ll even grow chitonous spines on their body walls to discourage the nudibranchs from coming back. These spines usually form on the individuals on the outside edge of the colony.”

Detail about this bryozoan species – Kelp-encrusting Bryozoan.
From Invertebrates of the Salish Sea: “Bryozoans start from a single individual zooid (an ancestrula) which repeatedly reproduces asexually to form a colony. In this species, the oldest individual is in the middle. Colonies of this species usually begin to be noticeable in late spring and grow through summer into fall. By fall they may form extensive crusts on the kelp and many colonies have merged with one another. In many bryozoans there are various types of zooids but in this species there is only one type of zooid which serves for feeding, for reproduction, and for defense. The colony appears to be a simultaneous hermaphrodite, or male zooids may develop first. They do not brood their young. Eggs are fertilized then released, and quickly develop into cyphonautes larvae which may feed and develop as plankton for several months. The larvae settle when they encounter kelp such as Laminaria or water with an excess of potassium ions. The small white nudibranch Doridella steinbergae [reclassified to Corambe steinbergae] may be found living and feeding on these colonies but it blends in so well it is difficult to see . . .”
Note there is a second similar looking cryptic nudibranch that can found on these bryozoans and that is Corambe pacifica. Corambe pacifica has a notch at the back. Corambe steinbergae does not.
I have never managed to find these cryptic nudibranchs. Grateful to Karolle Wall and Robin Agarwal for their photos below.

What happens to the kelp?

It is the natural cycle of kelp species like Bull Kelp, that at this time of the year, the large version (the sporophyte) begins to break down. Spore packets drop to the bottom of the Ocean which create a different version of the kelp. It’s Alternation of Generations and here is my blog about that wonder. Other kelp species like Giant Kelp are not annuals. They remain year round.

All photos (other than those by Karolle Wall and Robin Agarwal) were taken in early August near northeast Vancouver Island in Kwakwaka’wakw Territory ©Jackie Hildering.

Note: Some report that this species of bryozoan is an invasive in the Atlantic. However, “recent genetic studies indicate that this species is a complex of a number of long-separated clades. The only verified invasion is its introduction from the Northeast Atlantic to the Northwest Atlantic” (Source: Nemesis). Have you ever wondered how it can be that Bull Kelp forests largely die off in the winter but then reappear in the spring?

Have you ever wondered about the light patches in the fronds of Bull Kelp as seen in the three images below?

I hope that’s enough of a hook for you to want to know more about the remarkable reproduction of most algae / seaweeds (and ferns and mosses).

Their reproduction involves two versions of the same species. The parent generation looks nothing like their offspring but DOES look like their great-offspring’s generation i.e. there is alternation of generations.

Below you have my attempt at further explaining this aided by a really good graphic. 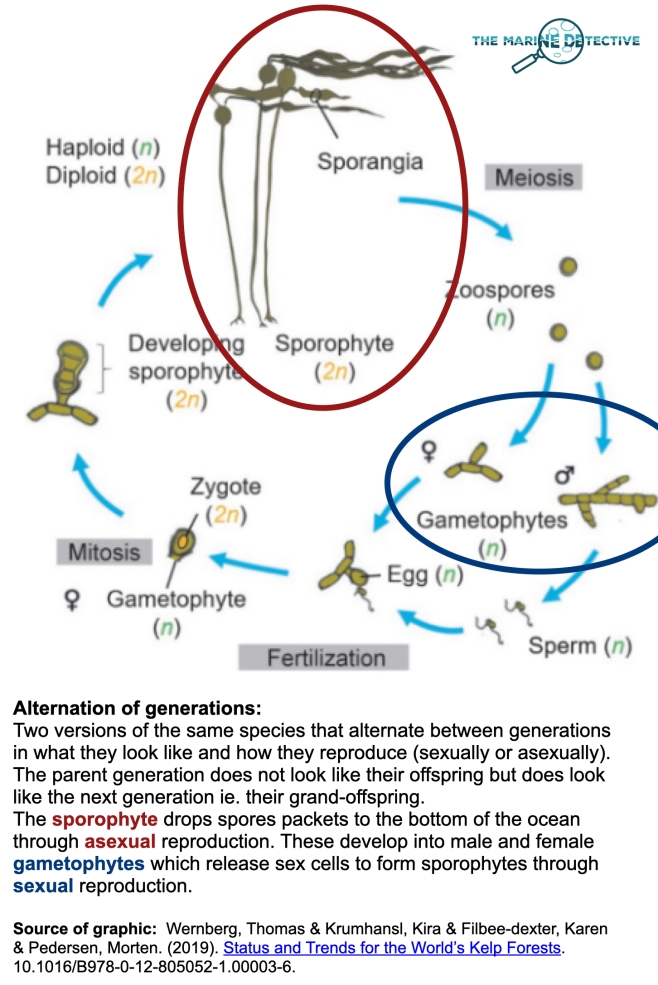 And for the super science nerds (I see you), more detail from Wernberg et al regarding reproduction in kelp forests: “Recruitment involves multiple microscopic stages (i.e. gametophytes and juvenile sporophytes). Because the sperm has to find an egg, male and female gametophytes must settle in close proximity at densities of ca. 1 square millimetre in order to secure fertilization (Reed, 1990). Gametophytes and microscopic sporophytes can persist in the kelp forest understory for weeks to months, where they serve as a ‘seedbank’ (Hoffman & Santelices, 1991). Microscopic sporophytes start growing once stimulated by high light (Reed & Foster, 1984) .  . . Recruitment into the adult population takes anywhere from a few months to 2-3 years depending on the species and local conditions (Pedersen et al, 2012, Teed, 1990). Most juvenile plants succumb to predation, stress, or self-thinning within the first year, but some individuals can remain viable for years without growing (Sjotun, Christie, & Helge Fossa, 2006) until space and light become available.”

And you thought  your sex life was complicated! 🙂

Note that of the giant kelp species found off our coast from California to Alaska, Bull Kelp (Nereocystis luetkeana) is an annual whereby most sporophytes die off every year. Giant Kelp (Macrocystis pyrifera) is perennial whereby the sporophyte does not die off at the end of the growing season.

If you have read to this point, congratulations! You are amongst the few humans who may have a good comprehension of alternation and generations. You know what is in the photo below.

Spore packet in the frond of Bull Kelp that washed up on the beach. It always makes me smile to see them while diving, knowing that they will make the forest grow anew.

You also know how it can be that Bull Kelp forests reappear in the spring. There were never really gone. The species was there all along, but just in a different version  / generation.

With regard to growth rate, the stipe (stem-like structure) of Bull Kelp can grow up to a maximum height of 36 m. The stipe would have to grow an average of 17 cm a day to reach this length in the 210-day growing period (Druel).  If you include the growth of the fronds (the leaf-like structures), the maximum growth rate has been documented to be at least 25 cm per day (Duncan). Giant Kelp grows even faster and bigger = up to 30.5 cm at day to heights of 53.4 m.

Do know that there is concern about diminishing kelp forests due to impacts of changing ocean conditions  / climate change  / Sea Star Wasting Syndrome. Some sea star species are recovering but the Sunflower Star is not whereby there are more of their prey, including urchins which graze on kelp forests. 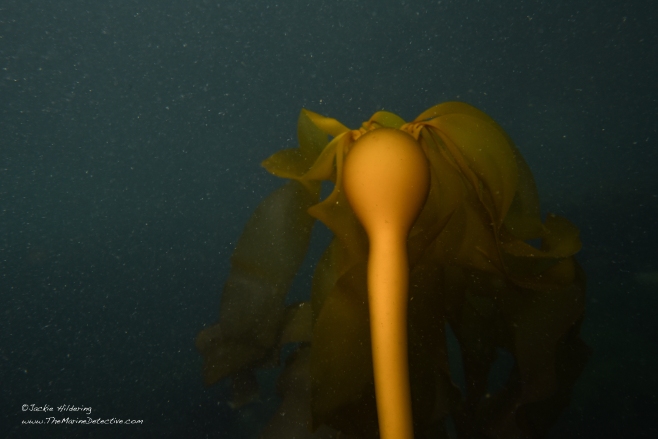 Sporophyte of Bull Kelp photographed yesterday. It’s the time of year when the Ocean is all the more soupy with life. It means that the more typical photos of beautiful kelp forests are difficult to obtain because the water is thick with gametes, phytoplankton, larvae and other zooplankton. Bu this is the time of year that the kelp forests are at maximum productivity – as habitat, food, oxygen producers and carbon dioxide absorbers. When it is colder, there is better visibility because there is less sunlight for phytoplankton growth and reduced cues for reproduction of marine invertebrates.

Do you see them?

The January sun streaming down, the light refracted against the hooded nudibranchs . . . the underwater rainbows?!

Hooded nudibranchs are already such ethereal, other-worldy creatures, to see the rainbows dancing against their translucent bodies made me catch my breath and desperately want to capture the beauty for you.

May you dream of underwater rainbows and – maybe- fall even a little bit deeper in love with the NE Pacific Ocean.

For information on hooded nubibranchs (includes images and video of them swimming and their eggs), please see my previous blogs at this link. 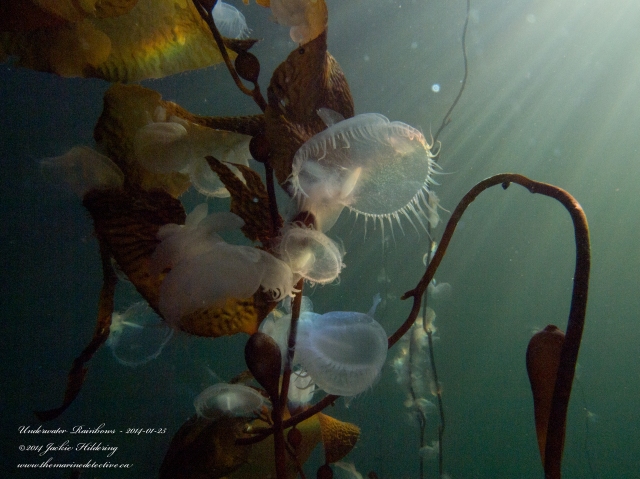