Update February 2nd, 2021
This blog was written in 2011 reporting this to be a Mola mola.
I can now share that this is NOT a Mola mola. It is a Mola tecta! It is now known that there are two species of Mola in the NE Pacific Ocean. See the CBC news article announcing this here: Meet the Hoodwinker, the Ocean Sunfish we Misidentified for Years.

Mola tecta is the Hoodwinker Sunfish. See diagram at the end of this blog for the discerning characteristics.

As a result of writing this blog in 2011 (with the great photos taken by friends), I was contacted in 2020 by the researcher who could discern this species, Marianne Nyegaard who works in New Zealand. Now, in my role with the Marine Education and Research Society, we are helping get more sightings of Mola off the coast of BC to get a better sense of relative abundance. To relay sightings, please see this link.

Something very unexpected landed near the Port Hardy seaplane base on October 20th, 2011 – a dead Mola tecta. This species of ocean sunfish looks like a cartoon character rather than a relatively fast-moving, deep-diving fish whose design has been perfected by millions of years of evolution. 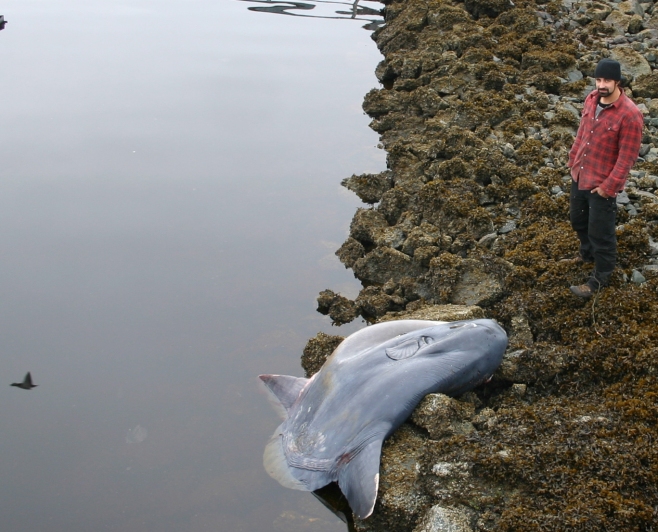 Chad Chrighton, the pilot who found the Mola tecta near the seaplane base. Photo credit: Mike D’Amour (North Island Gazette).

Mola species were believed to be passive drifters who travelled only at the surface, wherever the current took them. However, satellite tracking studies have revealed that they dive deeper than 600 m and travel an average of 10 to 20 km per day, the same distance traveled by open-ocean shark species.

Matthew Drake measuring the Mola tecta To give you get a sense of size, Matthew is 2m tall (6.5′). Photo credit: Erika Grebeldinger.

They are certainly a rarity on the inside of Vancouver Island however and I greatly appreciate that Matthew Drake let me know about this find and that he undertook a necropsy of the giant together with Louisa Clarke and Natasha Dickinson.

This Mola tecta measured 2.00 m wide, from beak to tail fin, and 2.06 m long, from the tip of one pointy fin to the other. It may have weighed more than 200 kg. Remarkably, this is small for its kind. Mola tecta hold the record for being the largest bony fish on earth with an average mass of 1 tonne. The largest Mola mola (cousin to Mola tecta) ever recorded was 2,235 kg and 3.10 m by 4.26 m (it was struck by a boat near Australia in the early 1900s). Note that the whale shark can be more than 9 times bigger than this but, it is not a bony fish.

Matt and the team concluded that the Port Hardy Mola tecta was female which meant that she could have up to 300 million eggs in her one ovary. This is another record for the species: having more eggs than any other animal with a backbone.  Another astounding fact is that the larvae could grow to be 60 million times their weight at hatching.

The investigation also revealed partially digested jellyfish in her gut, which is the typical prey of Molas / Sunfish. Their diet also includes small fish, eelgrass and crustaceans and they are able to spit out and pull in water and food with their unique mouthparts. As with all species that feed on jellies, a conservation concern is that they mistake plastic bags for their food. However, there was no evidence for this being the cause of death for this particular Mola tecta.

Maybe parasites were a factor in her death? The team found lots of skin and intestinal parasites! Some of the round worms in the guts were even still alive. Parasites are common for Mola molas. In fact, it is now believed that the behaviour of “sunning” at the surface (hence, ocean “sunfish”) might be so that birds can feed on the skin parasites and that jumping more than 3 m out of the water might help dislodge some parasites too. Mola tectas are also found associated with drifting kelp patches, where small fish can clean away the pests.

HOLY MOLA you never know what you are going to find in our amazing marine backyard.

All the information collected was reported to oceansunfish.org and the mouth parts are on display in Telegraph Cove’s Whale Interpretive Centre.

Advance only if you are NOT about to eat lunch and/or if you a biology-type like me who can view these kinds of photos in rapturous fascination anytime!

Links regarding other Mola species:

Her intestines were an astounding mass of worms. Likely the species include the parasitic flatworm, Nematobibothrioides histoidii which is thread-like but can grow to be over 12 m (40′). No one apparently knows just how long they can become, in part because dissections/necropsies on Mola mola are rare events. Photo credit: Natasha Dickinson. 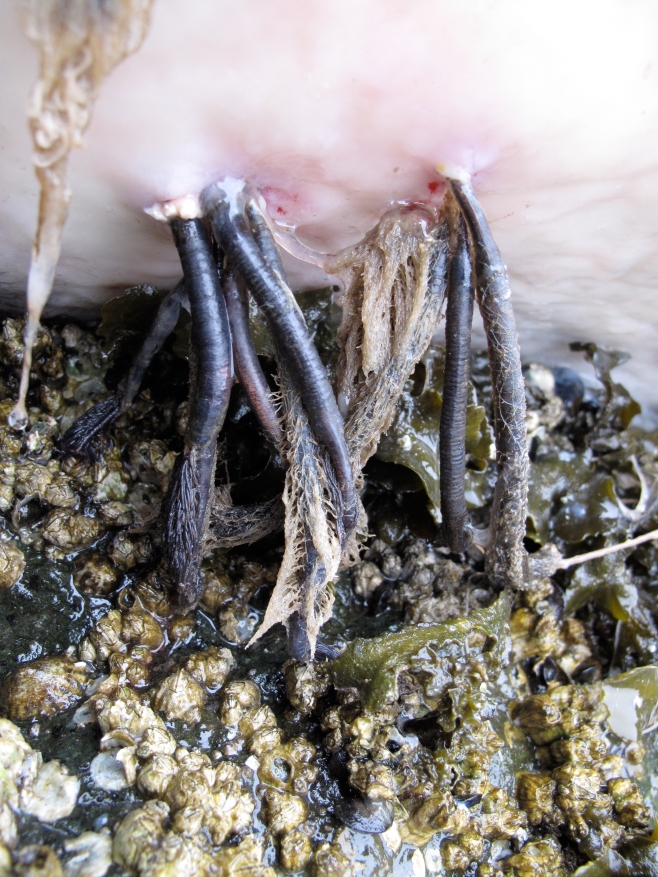 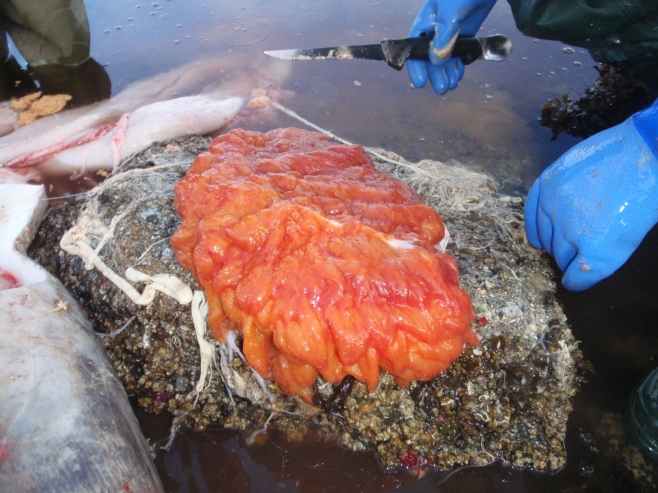