[Updates: November 18, 2012 – the application for an investigative license for ocean power in whale critical habitat has been withdrawn. Please see the media release at this link.
November 14, 2012 – To our surprise, the deadline to provide comment regarding the land tenure has been extended, it is now also December 2nd.
November 13, 2012 – As testimony to how serious this is – international Whale and Dolphin Conservation (WDC) has picked this up and put out an action alert.]

For a bundling of media items on this see the end of the blog.]

There are times when expletives like “Hell No!” are justified and I am sure you will agree this is one of those very unfortunate times and – your action is needed.

Blackney Pass off Johnstone Strait is an epicentre of whale activity and there is an application for an “Investigative License of Occupation – Ocean Power ” for this very area. Yep, that’s right . . . an application for “actual installment of technical investigative and monitoring equipment” that could lead to turbines being in critical whale habitat. The proponent is SRM Projects Ltd of Nanaimo, B.C.

While I of course support initiatives to reduce the use of climate-changing fossil fuels, to have turbines in critical whale habitat would be pure, simple, total, utter insanity. No matter how advanced the turbine technology, no amount of mitigation could compensate for the noise, prey reduction, and other disturbance to the whales.

The deadline for your two quick submissions is December 2nd. Below, I have strived to make commenting very expeditious for you, but first, a bit more on how preposterous the application is, just to fuel you up for those comments.

Here is the map showing the area for the “license of occupation“.

Here is the map showing the application site relative to the critical habitat map for northern resident killer whales from the Final Amended Recovery Strategy for Northern and Southern Resident Killer Whales in Canada. [Why was it amended you might ask? Because the federal government had to be taken to court TWICE to enforce their legal obligation to protect killer whale habitat – first ruling December 7, 2010; appeal ruling February 9th, 2011.]

The very ocean current that makes this area of interest for staking a claim for ocean energy is what makes this such a rich area for marine life. Multiple currents collide causing a merry-go-round in which plankton and fish are concentrated. The threatened northern resident killer whales feed here with great regularity, as do members of the threatened population of humpback whales, Steller sea lions, Dall’s porpoise, etc.

The importance of this area for killer whales can be supported by almost 4 decades of data collected by Department of Fisheries and Oceans and the OrcaLab. More recently, with regard to the humpbacks, I and my fellow researchers from the Marine Education and Research Society, can testify to how often these giants are in this area.

But it is the whales that speak with the most convincing voices of all. Here is the OrcaLab’s September 16th, 2012 visual and acoustic recording of the I15 and A30 matrilines of northern resident killer whales in the very area “in question”.

For researchers, whale watchers and on-line followers of the OrcaLab’s monitoring of whales, we all know that this kind of activity is not exceptional in this area and we know what is at stake.

As final stark evidence of how often there are whales in this area, note where, of all the places the OrcaLab could have put their whale-monitoring cameras and hydrophones, they are positioned. Then again, note the location of the proposed ocean power project.

Proposed site (red) relative to positions of the OrcaLab, and their hydrophones and cameras. Testimony to just how often there are whales here. Click image to enlarge.

One would hope that government agencies would surely deny this application but  . . . we have so many recent examples of this being tragically misplaced faith and we cannot count on there being any legislation in place for sound environmental assessment that would confirm environmental impacts. May I point out again that the government had to be taken to court TWICE to be order to acknowledge and protect killer whale critical habitat?!

Therefore, we collectively need to make our “Hell No!” heard now.

If you can, come to the Port McNeill “community information session” given by the proponent, SRM Projects Ltd of Nanaimo, on November 20th in Room 4 of the Old School from 6:30 to 7:45 PM. There will also be an information session in Campbell River on November 22nd but this will focus on SRM’s proposals for the Discovery Passage and Seymour Narrows. It will be in the Rivercorp Boardroom, 900 Alder Street from 7:00 to 8:30 PM.

With this application being so ludicrous, I can’t help but wonder if I am missing something. Is this just part of a staking frenzy or is it some sort of distractor so that attention is taken away from something else?

SRM LTD’s projects are listed here. Again, reductions to our voracious fossil fuel consumption are very much needed but, at the cost of having turbines in whale critical habitat? Unequivocally – no.

Huge gratitude and respect to Angela Smith for being the one to take note of the notification of this application and to Leah Robinson for ensuring I had many of the details I needed for this blog. 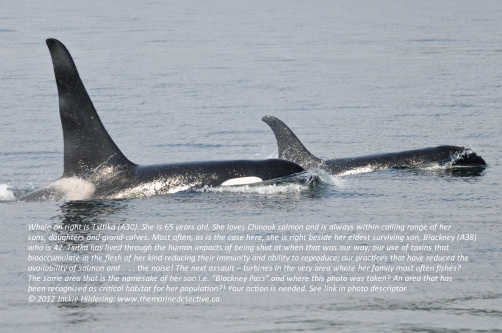 This posting on my FaceBook page has had success in creating further awareness. Feel free to share! Whale on right is Tsitika (A30). She is 65 years old. She loves Chinook salmon and is always within calling range of her sons, daughters and grand-calves. Most often, as is the case here, she is right beside her eldest surviving son, Blackney (A38) who is 42. Tsitka has lived through the human impacts of being shot at when that was our way; our use of toxins that bioaccumulate in the flesh of her kind reducing their immunity and ability to reproduce; our practices that have reduced the availability of salmon and . . . the noise! The next assault – turbines in the very area where her family most often fishes? The same area that is the namesake of her son i.e. “Blackney Pass” and where this photo was taken? The area that is designated as critical habitat for her population?

42 Responses to “Tidal Turbines in Whale Epicentre? Hell No!”