This is a Brooding Anemone (Epiactis lisbethae to 8 cm across).

She may not have a backbone but she’s a Super Mom!

As many as 300 young can be clustered around her in up to 5 rows, benefitting from the protective canopy of her tentacles which contain stinging cells (nematocysts). The offspring remain here until big enough to stand a good chance of surviving on their own. They then crawl toward independence, claiming their own piece of the ocean bottom.

I am awestruck by this species’ beauty and reproductive strategy. It is also a reminder of how little we know about marine species that the Brooding Anemone was not recognized as a distinct species until fairly recently (1986), and it still so often gets confused with the Proliferating Anemone (Epiactis prolifera).

I share my marine “detectiving” about this species with you to provide a further example of how extraordinary our marine neighbours are and maybe, thereby, help inspire greater conservation efforts.

But yes, the timing of the blog is no accident. It may be that reflection upon an anemone Super Mom stimulates thought about our human mothers – just in time for Mother’s Day.

So here goes . . . bear with me as I build to clarifying the reproduction of our featured species.

Anemones have many reproductive strategies.

For many species, reproduction can be asexual as well as sexual with strategies like budding off offspring; splitting into two; or pedal laceration where a torn piece of the bottom of the anemone can grow into another anemone!

Some species are hermaphrodites with highly diverse ways by which offspring develop into adults.

In species that have separate sexes, many are broadcast spawners where Mom and Dad release their eggs and sperm into the ocean around them. Fertilization and development thereby happens in the water column.

Then, for only some 20 species of the world’s more than 800 kinds of anemone, there are those in which the female captures the males’ sex cells as they drift by and draws them into her digestive cavity to fertilize her eggs. She “broods’ her young.

Some such anemone species are internal brooders.  The young develop inside Mom until they hatch and are expelled into the water column as planktonic larvae.

After she has fertilized the eggs inside her digestive cavity with the sperm she has captured, the young develop inside her until they hatch into planktonic larvae. THEN, they swim out of her mouth, settle on her body under the tentacles and grow into little anemones that feed themselves.

When the offspring are big enough to stand a good chance of survival without the protection of Mom’s tentacles, they shuffle away to independence, leaving space for next season’s young.

The brooding anemone’s young are all of the same generation and are therefore all about the same size.

However, there is a second externally brooding anemone species in the eastern North Pacific where you most often see young of different sizes huddled under Mom’s tentacles. This species – the Proliferating Anemone (Epiactis prolifera) is the one that very, very frequently gets confused with the Brooding Anemone. 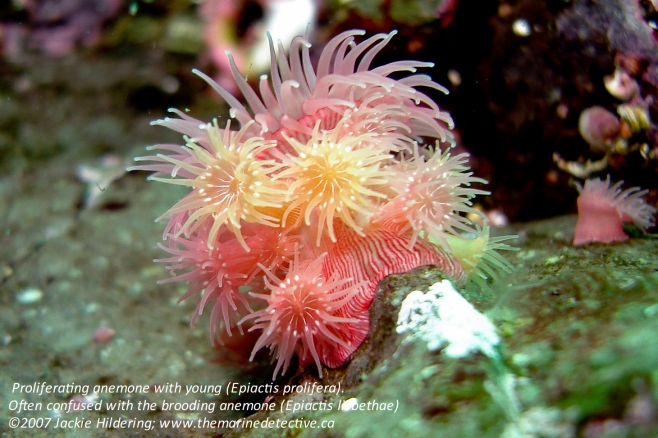 I have strived to clarify the many differences between these two externally brooding anemone species in the table below but to summarize: the Proliferating Anemone is smaller and does not have striping all the way down the column; adults are hermaphrodites; breeding happens year round; there are far fewer young clustered under mom’s tentacles; and they start off there as fertilized eggs, not as free-swimming larva.

The main similarity between these two species is and yes, I am going to use a tongue twister here since I believe it is inevitable when discussing anemones: with anemone mothers like these, baby anemones are protected from their anemone enemies!

Now off you go, share some ocean love with a Super Mom!

There are so many human females out there worthy of awe. Where, were we to consider how many young they have shielded and helped to independence, the number might well be 300 or more!

Click to enlarge. Table summarizing the differences between Brooding and Proliferating Anemones. 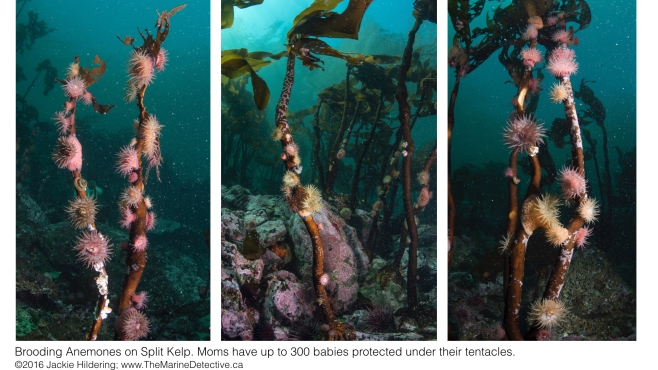