Current known tally of number of North Pacific Right Whales in British Columbian waters = four in the last 71 years (2022 to 1951). May be five but one could not be identified whereby it could not be ruled out that s/he was one of the whales previously documented. 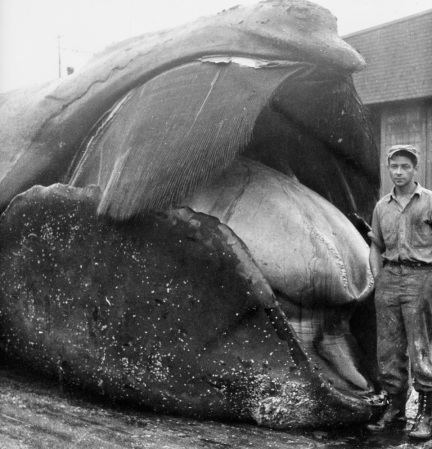 North Pacific Right Whale at the Coal Harbour whaling station in 1951. This was the last Right Whale seen in BC waters until June 2013. From 2013 to 2021, there have only been 4 confirmed sightings off the coat of BC. Photo: Gordon Pike, the DFO biologist responsible for monitoring whaling at Coal Harbour. Credit: Pacific Biological Station, DFO.

Update spring 2020 – another seen from the air. No ID photos.

Update October 25th, 2013
2nd right whale sighting in BC waters (different whale that than the one seen in June). See news item below.

Original blog from June 2013:
On June 9th 2013, while surveying off the west coast of Haida Gwaii for DFO’s Cetacean Research Program, biologist James Pilkington sighted one of the world’s most critically endangered mammals – a North Pacific Right Whale (Eubalaena japonica).

The species was once common but endured a catastrophic assault by whaling whereby there are now only about 30 left in the whole eastern North Pacific.

Reflecting on this whaling history makes clear how much positive change there has been in our attitudes to whales and this may have particular potency for those of us on Northern Vancouver Island due to BC’s last whaling station having operated in Coal Harbour from 1948 to 1967.

But, the devastation started far before that.

In 1835, intensive whaling began in the North Pacific and the most desirable target was the RIGHT whale. It was the right whale to kill since they were easy pickings with high reward.

Right Whales feed by using their huge baleen plates (up to 3 m long) to skim zooplankton into their mouths, slowly powering themselves forward with massive tails. When feeding on the surface in this manner, they made life very easy for whalers – being slow moving, often near the coast and easy to approach. The long, fine baleen had very high commercial value as “whale bone”, largely used to stiffen women’s clothing.

Also making them a preferred species for whalers is that Right Whales are particularly stout, weighing as much 90,000 kg at about 17 m.  They have very thick blubber which provided whalers with vast amounts of oil, desirable for lighting in that era. The large blubber layer also meant that right whales floated when killed, making them easier to harvest than other whale species. 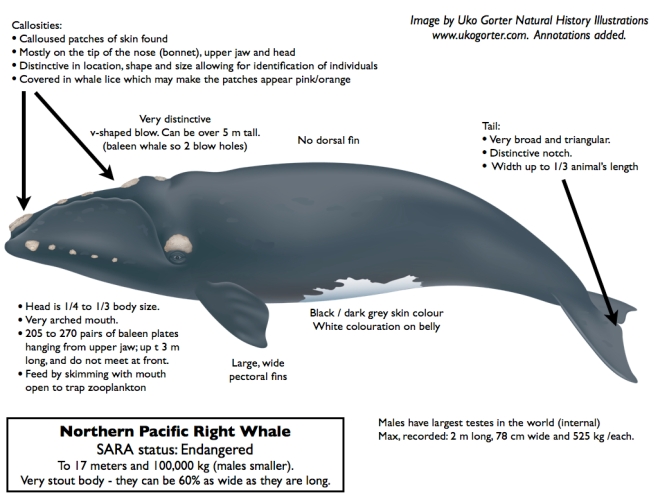 Being easy to kill and having high commercial value, meant the Right Whales of the world were done a great deal of wrong. For the North Pacific Right Whale alone, the estimate is that 11,000 were killed between 1835 and 1849 and that the species was determined to be “commercially extinct” by 1900.

In British Columbian waters, despite the knowledge that they were the rarest of the rare, BC whalers killed the only 6 confirmed North Pacific Right Whales sighted in the last century. Five of these were killed before 1933 and 1 was killed in 1951.

What might make this hit literally close to home is that the 1951 whale, a 12.5 m mature male was killed by Coal Harbour whalers (see photograph, 1951 North Pacific right whale with Gordon Pike, the DFO biologist responsible for monitoring whaling at Coal Harbour).

It was said to be an accident; that they did not know it was a North Pacific Right Whale but got the directive to kill him anyway.

What a difference 62 years makes.

The last thing on the minds of those observing the North Pacific Right Whale in June 2013 was killing it. From the moment James Pilkington noted the distinct v-shaped blow, hope soared that the “holy grail of whales” had been found and that the opportunity to study it might aid conservation.

DFO’s cetacean researchers, Dr. John Ford and Graeme Ellis joined James and shot the whale with cameras not harpoons, allowing the whale (a sub-adult) to be identified as an individual from the raised patches of skin called callosities that are unique to every right whale. They managed to get DNA and scat samples. DNA confirmed the whale was a young female and had not been previously documented. She has been assigned the ID MML90 (See Ford et al).

However, I believe that to truly know the significance of this sighting, it may take another 62 years.

Will society then be able to look back with the same sense of positive change, having learned that there are still many ways to kill a whale and impact the ecosystems for which they are ambassadors?

Will we have significantly reduced our fossil fuel addiction that drives climate change, impacting the whales’ food supply? Will we have realized that our individual demand for energy literally fuels the threat of tanker traffic, and therefore oil spills, on our Coast?  Will we have curbed our consumer lifestyles of disposable goods that lead to a literal sea of plastic?

With such changes, the potential increases for the recovery of North Pacific Right Whales and the health of the marine ecosystem on which we too depend. This will be our ultimate reward for better knowing right, from wrong. 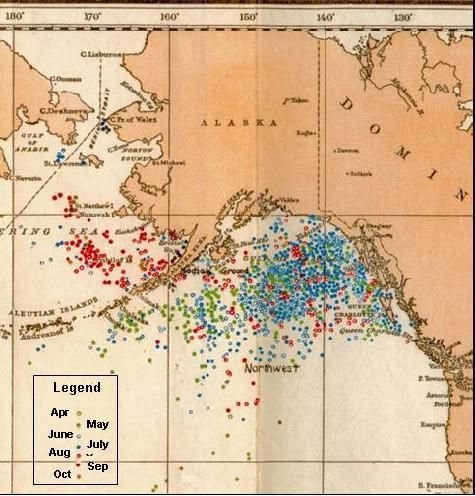 North Pacific Right Whale catches from 1785 to 1913 in the eastern North Pacific from the records of American whale ships. Photo by Environment and Climate Change Canada’s species at risk registry (via National Observer article at this link).

See video of the June 2013 sighting of the first North Pacific Right Whale in 62 years by clicking here, narration by Dr. John Ford.

Coverage of the June 2018 sighting:

Scientific paper on the two 2013 sightings. Includes that the 2nd sighting in 2013 was of a previously undocumented whale (now assigned ID MML92) and that the whale had severe scarring, likely from entanglement. DNA was not collected so gender of this whale is not known.
Ford, J.K.B., Pilkington, J.F., Gisborne, B. et al. Recent observations of critically endangered North Pacific right whales (Eubalaena japonica) off the west coast of Canada. Mar Biodivers Rec (2016) 9: 50.

Retrospective on the 2013 sighting off Haida Gwaii; Haida Gwaii Observer; July 22, 2016; “Scientists recall the whale tale of a lifetime”

2nd right whale sighting in BC waters in 2013, was on October 25, 2013. See – Vancouver Sun; October 31, 2013; “Second sighting of endangered North Pacific right whale in B.C. waters in 62 years – Researchers ‘astonished’ after whale spotted off the entrance to Juan de Fuca Strait near Victoria”