Today was the first time ever that, while diving, I made a gesture to my dive buddy indicating that my brain had exploded.

We weren’t deep; the remarkable find that had me awestruck was at 3 to 5 metre depth. It’s a known species and is found throughout the Atlantic, Pacific and Indian Oceans but  . . . . it’s certainly extremely rare here around NE Vancouver Island and it is SO otherworldly.

Let me take you on a short journey of discovery.

I was already pretty excited when I found the organism in the photo below. I knew it to be a salp “aggregate” and was delighted that there was an amphipod hitchhiker. See it? 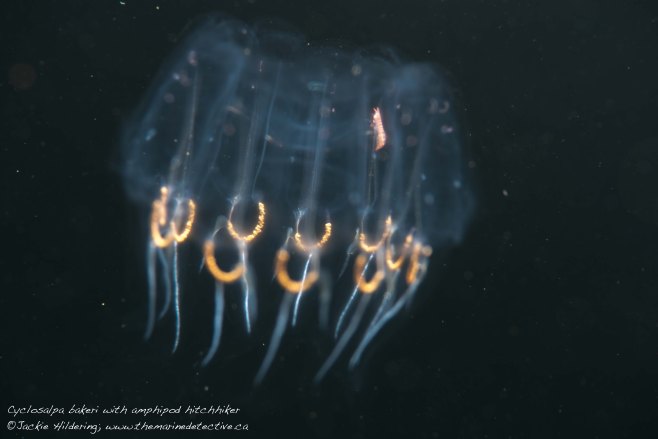 Salps are such unique gelatinous animals! They belong to the group of highly evolved invertebrates known as tunicates. Most tunicate species live attached to the bottom when they are adults but salps remain Ocean drifters for their whole lives. Because of their gelatinous “tunic” they have even been referred to as Ocean Gummy Bears.

Their reproduction is totally otherworldly! They alternate between two forms. The image above is of the “aggregate” form or “salp chain” that, dependent on species, can be made up of millions of individuals. The aggregate form reproduces sexually to form a barrel-shaped solitary form. The solitary form buds off (asexually) to produce the individuals that make up the aggregate form and so on! Salps apparently grow faster than any other multicellular organism! (Source: JelliesZone). 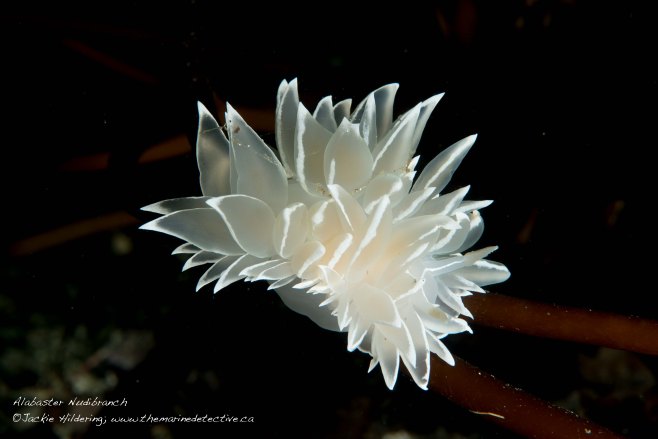 . . . . and then I saw something hovering above me, zeppelin like.

Brain exploded. WHAT was this?! 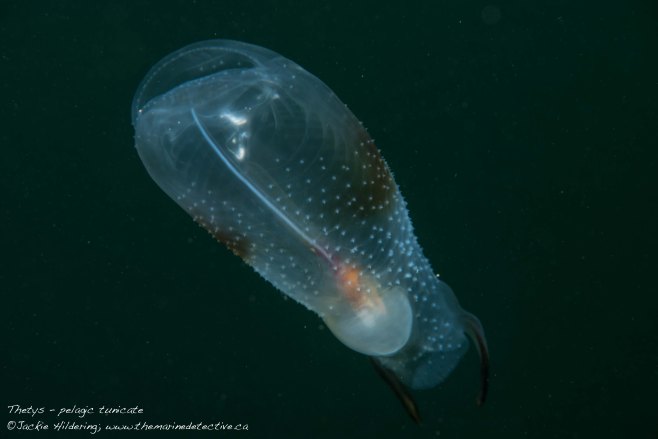 It had openings on both ends.

It clearly had internal organs.

And it had unique projections on what I assumed was its back end.

The look on my dive buddy Natasha Dickinson’s face in the image below says it all! 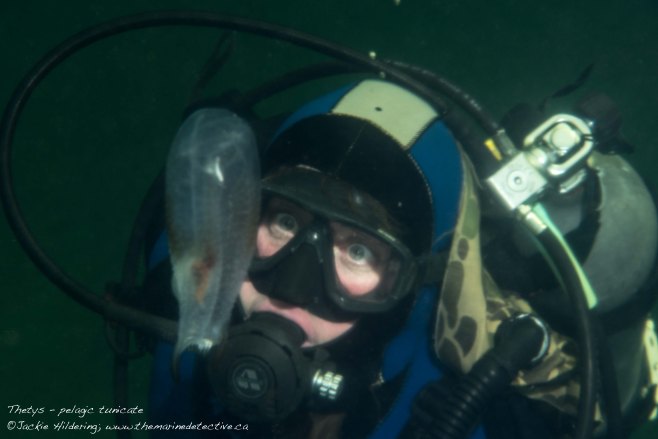 I was pretty sure that it was the solitary form of some species of salp but  . . . so big? 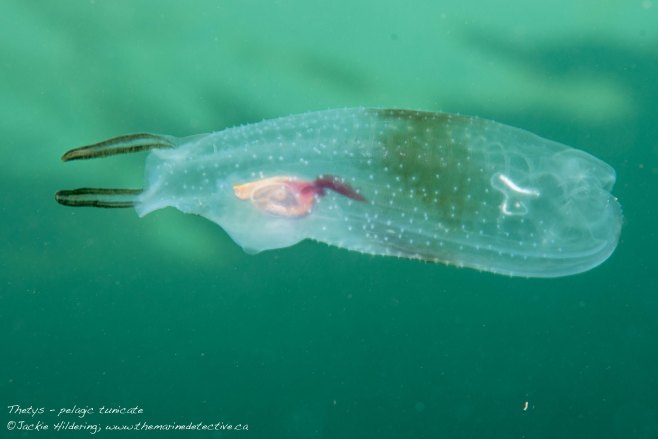 As soon as I got home I grabbed my copy of Wrobel and Mills’ “Pelagic Coast Pelagic Invertebrates” and emailed a few photos of this unique find to Andy Lamb, co-author of Marine Life of the Pacific Northwest.

Ahh – it’s wonderful to have friends in deep places. Andy came back very quickly with the ID. It was a salp indeed, in fact, the world’s biggest. Thetys* in the solitary form can grow to 33 cm!

From Dave Wrobel’s The JelliesZone webpage: “Thetys is truly an impressive member of the zooplankton.  It is the largest species of salp along the West Coast and is relatively easy to distinguish from all others.  Unlike most gelatinous animals, the body is relatively firm due to the thick spiny test (the test, or tunic, is the hard outer covering typical of many tunicates, hence the name for the group).  It retains its shape even when removed from the water.  Solitary individuals have 20 partial muscle bands . . . that are used for constricting the body while pumping water for feeding and locomotion.  A pair of pigmented posterior projections are very distinctive, as is the darkly colored, compact gut . . . Like other salps, Thetys continuous pumps water through a mucous net to extract phytoplankton and other small particles.   Although relatively uncommon in Monterey Bay [and therefore very uncommon so much further north where I sighted this individual], this widespread species can be found in temperate and tropical waters of the Pacific, Atlantic and Indian Oceans, to depths of about 150 meters.” 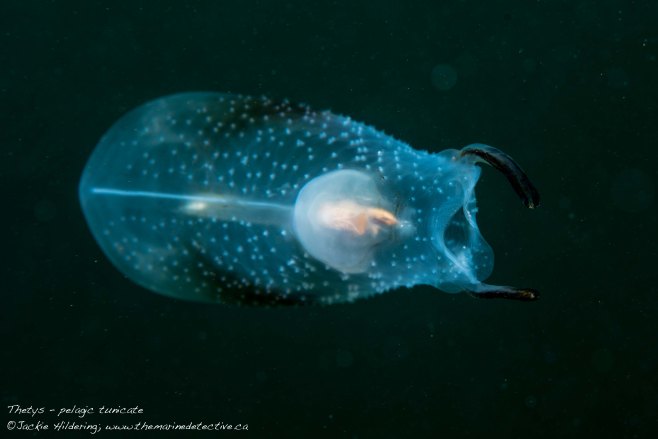 I was intrigued how an animal that lives in the open Ocean and depends on plankton could be so big?

How could it filter enough plankton out of the water? 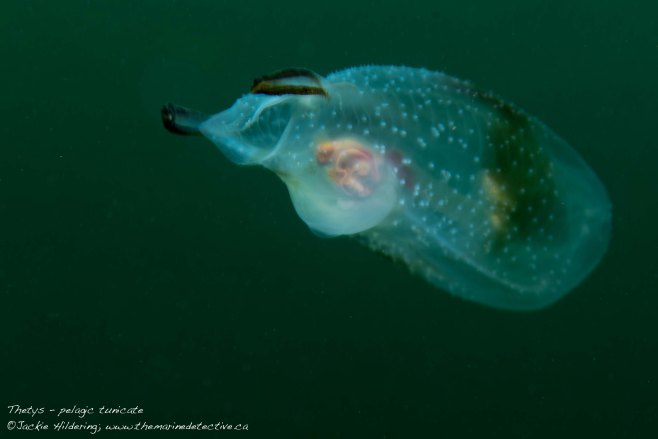 I came upon research from MIT (2010) that revealed how salps could get enough nutrients to be so big and fast growing.  Their mucus nets are astounding in how they are able to trap incredibly small-sized plankton. With this find, the researchers referenced salps as “the vacuum cleaners of the ocean” and confirmed how important they are because of what they do to huge volumes of climate-changing carbon.

In the Oceanus Magazine article Salps Catch the Ocean’s Tiniest Organisms, the researchers explain “As they eat, they [the salps] consume a very broad range of carbon-containing particles and efficiently pack the carbon into large, dense fecal pellets that sink rapidly to the ocean depths, Madin said. “This removes carbon from the surface waters,” Sutherland said, “and brings it to a depth where you won’t see it again for years to centuries.” And more carbon sinking to the bottom reduces the amount and concentration of carbon in the upper ocean, letting more carbon dioxide enter the ocean from the atmosphere, explained Stocker” [thereby reducing the amount in the atmosphere where it impacts climate.]

I of course also hoped to find a good photo or video of the salp chain of this species (the aggregate form) and came upon this 1-minute clip by Patrick Anders Webster (taken off the coast of central California).

And below, an additional video from Patrick from May 2016, also off the coast of California.

[*You may have noticed that the full scientific name for this tunicate species is Thetys vagina as assigned by the German naturalist Wilhelm Gottlieb Tilesius von Tilenau in 1802. Likely at that time, “vagina” did not yet have its anatomical meaning and the species name was chosen for the Latin origin of the word meaning “wrapper” / “sheath”.]