My dry suit has been hosed down and is drying in the sun; my regulator is soaking in fresh water; the washing machine is chug chug chugging with the clothes used over the last days of diving; and my head and heart are full of so much I want to share.

I’m back from another trip organized to God’s Pocket Dive Resort just beyond Port Hardy . . . more than 11 hours spent underwater over the last days. Such an escape. Such an immersion in wonder and that sense of humility that comes with submerging in the force that sustains this planet. Such an opportunity to learn.

I saw my first Sea Angel.

My buddy and I had been drifting along for about an hour. We had schooled with rockfish; hung next to Orange Sea Pens as they bowed in the current; and marvelled at the abundance of anemones and their babies, studding the forests of kelp. We had done our safety stop with a seeming snowfall of pulsing Aggregating Jellies streaming down around us in the sun’s beams.

We had already been further awed by Sea Butterflies “flying” by our masks. Sea Butterflies are planktonic sea slugs!  They are “pteropods” – swimming shell-less molluscs whose “wings”(ptero) are their feet (pods). This genus does have an internal gelatinous “pseudoconch” (false shell) and the brown dot you see in my image is the gut.  Sea Butterflies feed by forming a mucus web up to 2 m in diameter in which they trap smaller plankton and bits of organic matter. Oh to see that. It was apparently first documented in the 1970s by researchers while SCUBA diving. 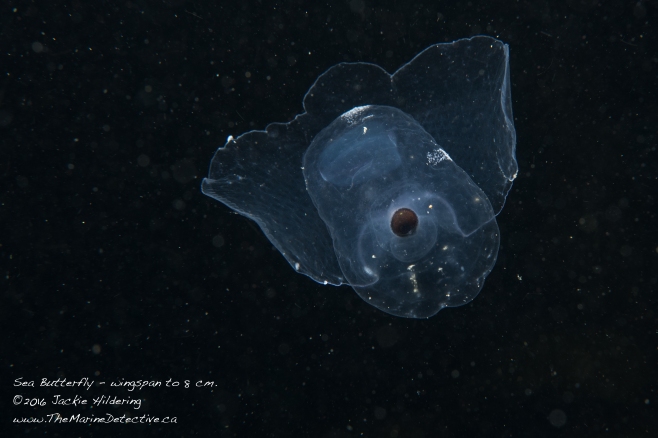 Sea Butterfly – Corolla spectabilis. Dark spot is the gut. See this link for more species information and a video (with excited diver vocals) of a swimming Sea Butterfly.

All those jellies and Sea Butterflies pulsing around us and then, just when I was about to break the surface back into the world where gravity has such a stronger hold on me, I saw it! So small, tiny wings pulsing . . . a Sea Angel! 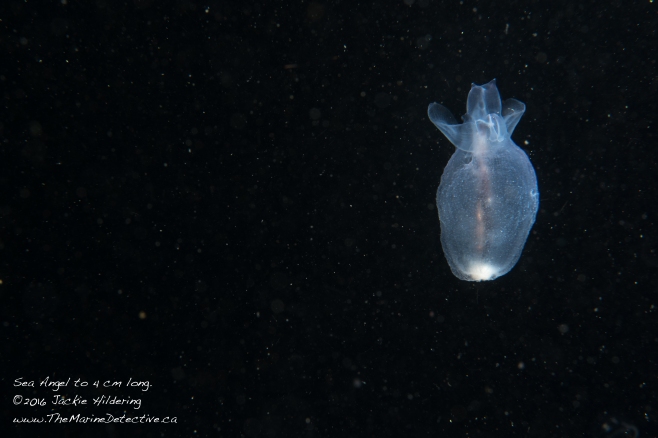 This is another species of planktonic, “winged” sea slug (but the adults of this species are completely shell-less; they do not even have pseudoconch). Sea Angels are a rarity so far to the north and are only occasionally seen at the surface (found to depths of 1.5 km).  Their presence is likely due to warmer waters (El Nino and possible climate change) and a big northwest wind that had raged a couple of nights prior. The wonder of it, to see something so otherworldly, to know of its rarity in this area, and to get a sense of its planktonic fragility – surviving from a larval stage, escaping predation by fish, and to be carried by the currents in the vastness of the sea.

It may be hard to imagine but this species is a voracious predator! Cliopsis feeds on other planktonic snails by grabbing them with a long proboscis (which can be up to two times its body length), a sharp radula and hooks made of chiton!

And yes, their diet includes Sea Butterflies. Sea Angels can eat organisms up to three times their size!

The marvel of it all, the delicate balance of this planktonic world about which so few of us have knowledge but which can be so impacted by our activities. There is concern about the impact of ocean acidification (caused by our carbon use) on the development of these organisms.

As always, don’t be despondent. See the beauty, know your connection, and recognize the common solutions and great gains of caring more  . . ..  and consuming less.