By The Marine Detective on September 5, 2016

I saw a Leatherback Sea Turtle. I did! And I don’t know if I can ever be the same again.

It happened on July 25th, while I was a member of Fisheries and Oceans Canada’s (DFO) Marine Mammal Research Section aboard the Canadian Coast Guard Vessel J.P. Tully. We surveyed up to 138 nautical miles (256 km) west of Vancouver Island. The purpose of the DFO survey was to increase knowledge about at-risk marine mammal and turtle species’ distribution and abundance.

Can you imagine the wonder, the euphoria, the astonishment, the sense of privilege at seeing this endangered giant that is a living dinosaur?

Here’s how it unfolded. It was at the end of the survey day around 8:02 PM on July 25th. I had finished my shift but was still having a discussion on the port side of the bridge. Suddenly, the Third Officer Brent Seamone said, from the other side of the bridge, “Hey, it’s a turtle!” 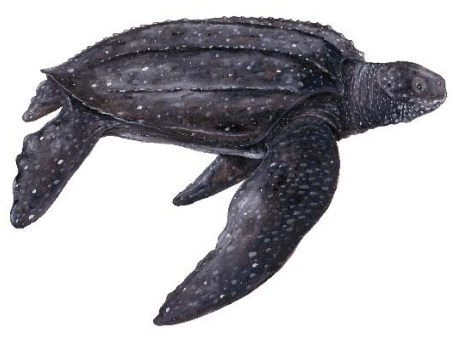 Leatherback sketch by J. Domm for Fisheries and Oceans Canada.

With all I had, I rushed to the other side of ship (apologies to any fellow crew members who may have been bruised as a result). And there it was . . . a shadow just under the surface, gliding away from the ship. I stared down its ridged back. Time seemed frozen, suspended for a turtle heartbeat or two. My synapses firing, my adrenaline surging, my brain questioned – could it really be true? And it was. In the vastness of the NE Pacific Ocean we had chanced upon a male Leatherback Turtle. This was the first known sighting of this endangered species in BC waters in two years* (and also reported to I-866-I-SAW-ONE).

Leatherbacks belong in the rich waters off BC’s coast, coming all the way from Indonesia to feed on jellyfish. I knew this well having only just launched the resource “Leatherbacks in BC” to raise awareness about these giants and the risks they face.

I marvelled at the incredible good luck of it – finding a proverbial needle in such a very large and deep haystack – but of course also that I happened to be on the bridge when I was. My dear friend who works so hard for Leatherback conservation and with whom I wrote the resource, had left the bridge mere minutes before the sighting. How wonderful it would have been for the Chief Scientist to see the turtle too.

I don’t have a photo. I wish I did to make the next part of what I have to share more impactful. Yes, now comes the “How to kill a living dinosaur” part.

Only a few days earlier, we retrieved these from the ocean – Canada Day balloons drifting out at sea in Leatherback habitat 20 days after Canada Day.

It was already our intent to have these images go widely into the world in the hope that it might make more realize that plastics (especially plastic bags) and balloons can kill endangered Leatherback Turtles (and other marine species). Sea turtles cannot discern these from their jellyfish prey. In fact, in a global study of 408 dead Leatherback Turtles, more than 30% had plastics in their intestines (Mrosovsky et al, 2009). 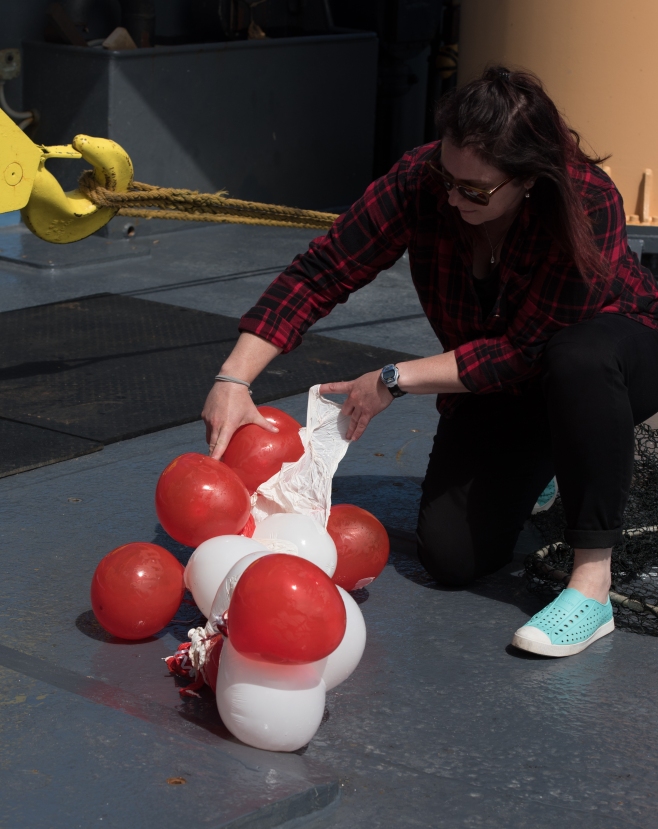 You can certainly see how the deflated balloons could be mistaken for jellies. Lisa Spaven of DFO in photo.

You can imagine my increased motivation for awareness now.

Of course we don’t know the backstory on these balloons – where they came from or if there was any attempt to retrieve them. 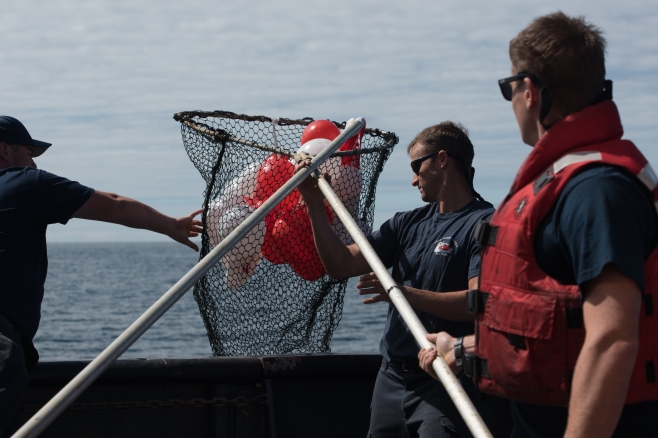 Tully crew removing the balloons from the ocean for the sake of Leatherbacks and other species.
Photo: Hildering.

We do know that it is a far too common a practice to “celebrate” by releasing balloons into the air e.g. as symbolization when someone dies and even to mark an environmental event (yikes!!!)

But of course, unless items are biodegradable, there is no “away”. There is no throwing “away”, flushing “away” or  . . .  drifting “away”.  There is a cost to other species, and ultimately, to ourselves.

What I hope these images and words do, is increase this knowledge. Please could you help?

The solutions are simple, please help increase awareness that #balloonsblow and #plasticspollute.

For more on the wonder that is Leatherback Turtles in BC, please see www.LeatherbacksInBC.org. 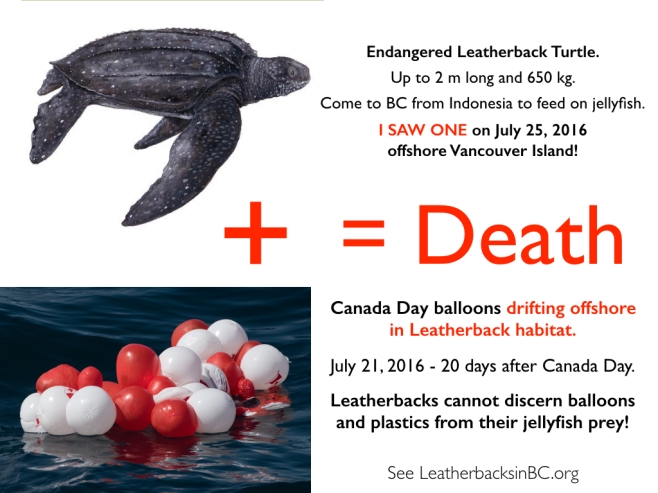 * Last reported sighting of a Leatherback Turtle in BC waters prior to this was August 20, 2014 off SW Vancouver Island.