Update September 24, 2020 – Species has been reclassified into two.

Triopha modesta has been determined to be a trans-Pacific species and is far more likely to be off the coast of British Columbia and has both flat and branching tubercles and globular bits on their side (“relatively small and dendritic dorsal tubercles, two rows of arborescent tubercles on the dorso-lateral appendages of larger individuals”).

Triopha catalinae has been determined to be an eastern Pacific species (but there is overlap) and have large, conical or rounded dorsal tubercles.

Original post from 2016:
In having noted the recent “Creepy Clown” Halloween-related absurdity in the far off periphery of my life, I thought I would share the beauty of the clowns abundant below the surface at this time of year – Clown Dorids.

Clown Dorids are a species of nudibranch (Triopha modesta to 7 cm).

Nudibranchs are sea slugs with naked gills and those in the dorid suborder most often have their plume of gills on their posterior (around the anus in fact). See the orange frills in the Clown Dorids in these images? Those are their gills.

Clown Dorid with gills are on the right. It’s “rhinophores”, by which it smells its way around, are on the left, atop its head. 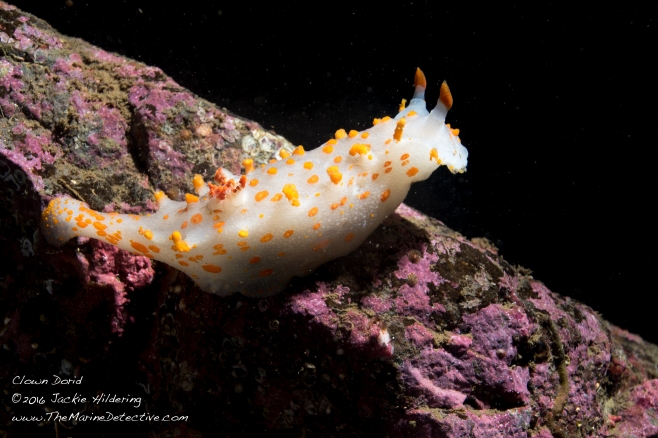 That’s all!  Clown Dorids cannot fully retract their gills like most other dorid species.

Note too the beautiful “oral veil” with papillae that aid Clown Dorids in finding food.

Also unlike many dorids, Clown Dorids do not feed on sponges. They feed exclusively on bryozoan species; those crusty colonies of organisms often found on kelp.

There were a particularly large number of Clown Dorids on my dive this past October weekend with many egg masses. 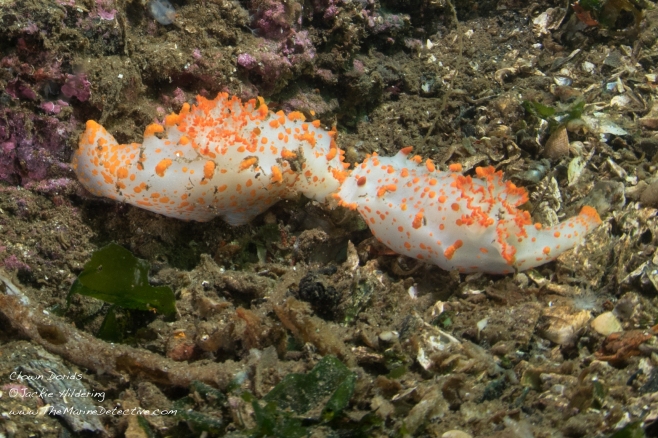 Clown Dorids that have found one another (relying on smell and touch) and maneuvering into the mating position.

Nudibranchs mate right side to right side. If you look very carefully in the photo below, you can see a bump on the individuals’ right side. This structure is the “gonopore” and is usually retracted. They lock onto one another with their gonopores and both become inseminated.

Clown Dorids extending their mating organs and about to lock on right side to right side. (Ochre Star beside them.).

The gonopore is easier to see in the following  image. 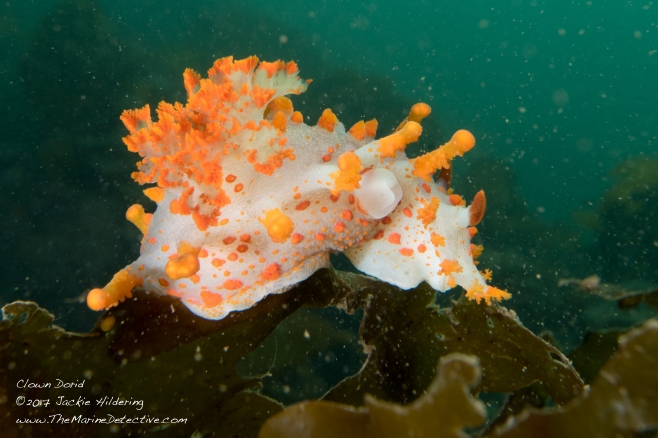 Clown Dorid – note the “gonopore” on the right near the nudibranch’s head.

The egg masses of each species of sea slug look different. However, it is very difficult to discern the eggs masses of some closely related dorids. The ideal is to find an individual laying the eggs.

However, in all these years, I have never managed to get a photo of a Clown Dorid laying eggs. Dive buddy Paul Sim has though. See his great image below. 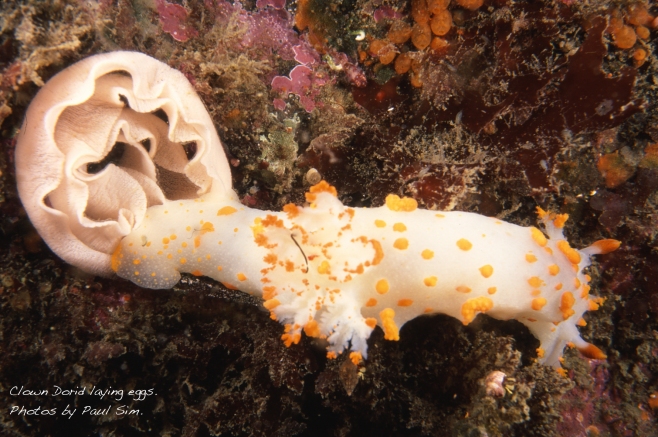 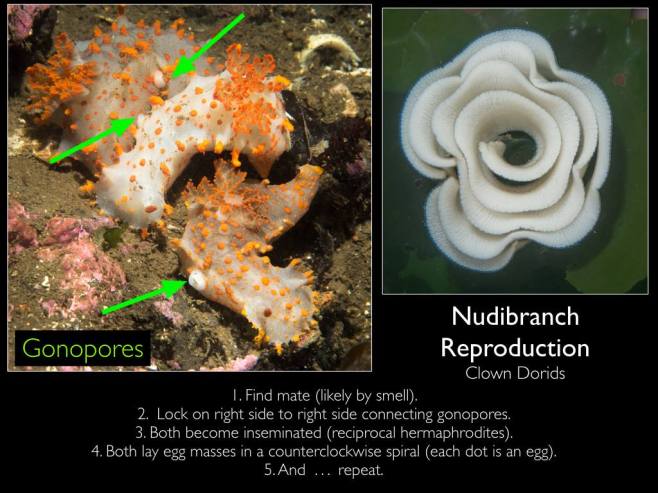 Summary from my social media post on December 13, 2016: Oh the fabulous way sea slugs ensure their kind survives! Imagine the challenges as a sea slug – you’re slow, you can only sense light and dark . . . . so when you finally find a mate it sure makes sense to be a simultaneous hermaphrodite so you both end up laying eggs. And the beauty of the egg masses! They are species specific i.e. the egg mass of each species of sea slug looks different. AND, wondrously, for almost all nudibranch species (at least in the northern hemisphere), these masses are almost always laid in a counterclockwise direction (sinistral) starting at the centre, with equal space between the whorls (i.e. an Archimedes spiral).

One Response to “Bring in the Clowns”