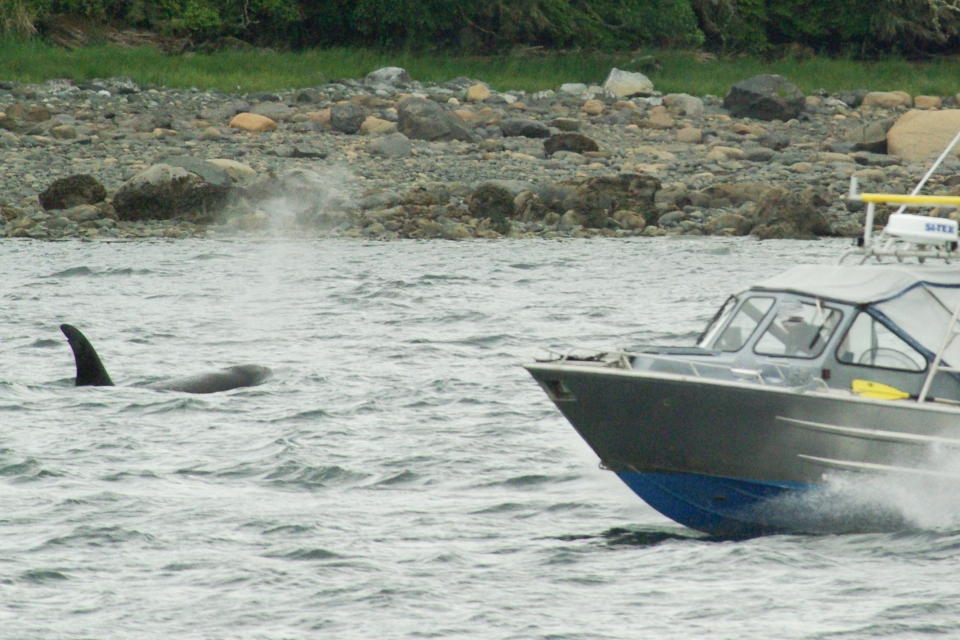 Original post form May 2017:
You’ve seen it haven’t you, the video of the little girl getting pulled into the water by a sea lion habituated to people feeding him?

And  . . . you’re likely baffled and outraged that there has been no penalization for those humans misguided enough to cause this habituation?

Please then, while there is so much public attention on this “incident” and the limits of the current Canadian Marine Mammal Regulations, let’s make it count.

Let’s ensure that the amendments that would much improve these regulations are FINALLY passed into law. It will take less than 5 minutes of your time to help, I promise. But I need to provide a bit of background to maximize our chances of succeeding. If you are already aware of the limitations, click here to go directly to “This Is How We Create Change”.

The Problem:
Currently, the Marine Mammal Regulations under the Fisheries Act (Section 7) state “No person shall disturb a marine mammal  . . .” but there is no definition of disturbance. Thereby, there are significant limitations to prosecuting people whose behaviour puts marine mammals at risk e.g. an expert witness is needed to testify that a marine mammal was indeed “disturbed”.

Vessel under power and almost on top of a member of the A30 matriline of Northern Residents (Threatened population). Photo: ©Jackie Hildering.

The Solution:
The solution has been available since 2004 but has yet to be entered into law by the Federal Government.  That’s right, 13 years ago, the “Regulations Amending the Marine Mammal Regulations” were drafted. I was part of the process. They have twice gone through a public review process and still  . . . no action.

They are incredibly solid and will allow for better prevention, enforcement and understanding of threats to Canada’s marine mammals because they:

These regulations would of course also reduce risk to humans e.g. the girl being pulled into the water by a habituated sea lion and injury to boaters as a result of colliding with a whale.

Vessel at high speed near Northern Resident Orca (Threatened population). Did not slow down while clearly aware of the whale’s presence, and presumably, the potential of other whales being in the area. Photo: ©Jackie Hildering.

Here’s How We Make Change

Please, contact your Member of Parliament and insist upon these regulations being passed into law.

You can find their contact information by clicking this link.

In case it is of help, here is sample text that could be used:

“I am aware of the limitations of the current Marine Mammal Regulations and that, for more than a decade, amendments have existed that would much improve the protection of Canada’s marine mammals (many of which are at risk). It is unacceptable that the Federal Government has yet to pass these into law. Thereby, I ask you, as my Member of Parliament, to urgently undertake action to enable the “Regulations Amending the Marine Mammal Regulations” to come into force. If further background is needed to understand why there is such urgency, see this link https://themarinedetective.com/2017/05/24/enough-is-enough.”

How’s this for astoundingly misguided behaviour? Boats are to remain at least 100m away from seal and sea lion haulouts and rookeries. Steller Sea Lions are protected under Canada’s Species at Risk Act. 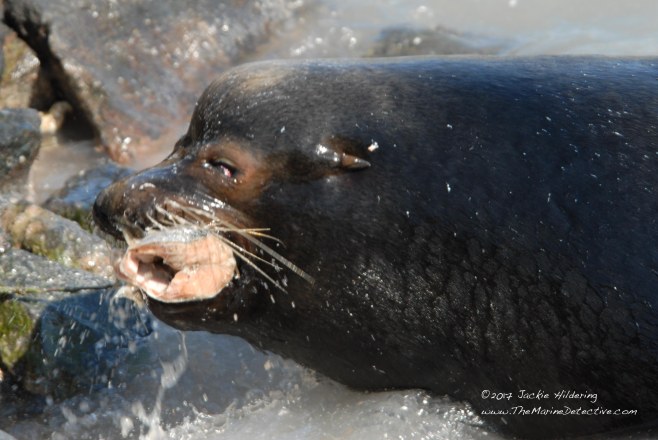 Boat at high speed in proximity of Humpback Whales “Slash” (BCY0177) and her 2016 calf (on left). Collision is a serious risk for whales AND boaters. Photo: ©Jackie Hildering.

Background:
A video went into the world on May 20th, 2017 entitled “Killer Sea lion drags girl into Steveston waters” (Steveston, British Columbia). When it was brought to my attention, I posted the following on social media:

“NOT a “Killer Sea Lion”. Rather – misguided humans. Please help educate around why a mature male California Sea Lion grabbed a child that was allowed within a metre of him. This is absolutely not natural behaviour. THIS is indisputably a sea lion that has been fed and habituated to humans. This is predictable. By humans not respecting the wild, the wild loses wariness, associates humans with food (or some other “reward”), and most often . . . loses entirely. THIS is yet another reason why the amendments to the marine mammal regulations should finally be passed by our government. They define “disturbance” and enter into law . . . no feeding, no swimming with, no touching, stay 100m away, etc (they have been drafted since 2004!).  Please, if you witness marine mammal distress or disturbance (includes feeding) call the Incident Reporting Line 1-800-465-4336.”

The resounding response of outrage to the incident is what has led to my believing that we can make this count; that we can ride this wave of awareness to have the amended regulations passed.

Thank you so much for caring as you do and helping to ensure the protection of Canada’s marine mammals. 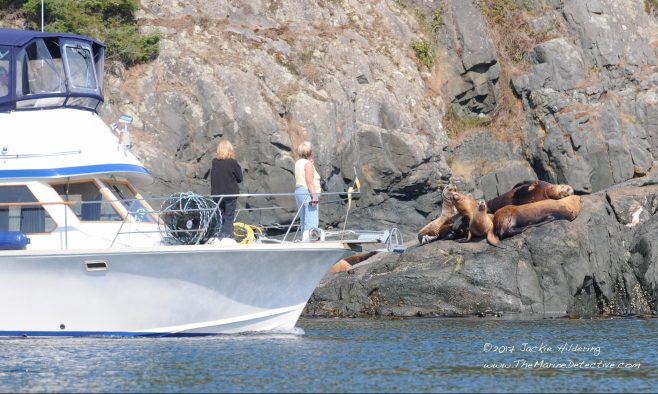 Close passes like this contribute to habitation; animals losing their wariness; and the disruption of life processes like feeding, nursing and resting. Photo: ©Jackie Hildering.

7 Responses to “Enough is enough! Your help needed to stop disturbance of marine mammals in Canada”