It’s one of the characteristics that unifies every living thing on the planet – we all need to get rid of waste.

How do octopuses do it? See the video and explanation below.

Why share? Because I solidly believe the world can be a better place through understanding and respecting the commonalities and differences of others AND through marvelling at the natural world.

With great thanks to Krystal Janecki for her video and Neil McDaniel and Jim Cosgrove for their knowledge.

Video above: Giant Pacific Octopus defecating by ©Krystal Janicki November 5 2018, Madrona in Nanoose Bay, British Columbia, Canada. Observations are that in areas where octopuses appear to be eating more bivalves like Swimming Scallops, the poo is whiter / paler in colour. In areas where they appear to be eating more Red Rock Crabs, the poo is various shades of red. (Source: Jim Cosgrove, personal communication).

The detail below on octopus digestion is from “Super Suckers – The Giant Pacific Octopus and Other Cephalopods of the Pacific Coast”
by James A. Cosgrove & Neil McDaniel (Harbour Publishing):

“The first structure for food gathering [in octopuses] is the interbrachial web, the umbrella-like membrane between the arms that the octopus used to enfold food such as crabs, shrimps and sometimes even fishes and birds.The web forms a bag-like container that holds prey close the the mouth . . .

The second structure is the mouth. An octopus has two pair of salivary glads, anterior (front) and posterior (rear). The posterior salivary glans produce a toxin called cephalotoxin. in giant Pacific octopuses this is not known to be deadly to humans, whereas in the blue-ringed octopus of the South Pacific it has killed people. When an octopus captures food in its web, it secretes cephalotoxin into the water, where it is absorbed through the gills of its prey. The neurotoxin affects the nervous system and causes the prey to lose consciousness and stop struggling. The octopus can then use its suckers to aid in dismembering prey such as crab.

The beak, the hardest part of the octopus, is made of the same chitonous material as human fingernails. It is black and looks like the beak of a parrot. The mouth also has a specialized tongue called a radula. The file-like organ is covered with tiny, sharp teeth that are replaced when they wear down, much as sharks regrow teeth. The radular teeth shred the prey’s tissue once the beak has bitten the food into chunks. Working together with the beak and radula are secretions of the anterior (front) salivary gland. The gland produces a mixture of substances called enzymes, which cause the food to break down quickly into a jelly-like substance that can be easily digested. A combination of the enzymes and the radula enables an octopus to remove even the tiniest bit of tissue out of the tip of a crab’s leg.

Once the food is captured, eaten and swallowed, it travels along a short tube called the esophagus (similar to the throat in a human) to a structure called the crop. This is not exactly the same as a bird’s crop, but it does function as a storage place for undigested food.

If the stomach is empty, food passed immediately from the crop to the stomach, which despite distinct differences, functions much like our stomach. In the giant Pacific octopus the digestive enzymes do not come from the wall of the stomach but are produced by the live and introduced into the stomach through ducts. These enzymes cause the food to break down into small molecules that the blood absorbs and transports back to the liver. There they are processed and distributed to the cells of the body. This dual-function liver is different from a human’s whose liver primarily deals with the products of digested food.

Now we find another major difference from vertebrates such as humans and also from squids. Once the food in the octopus stomach is digested, the waste material has to be evacuated. The octopus stomach, however, has only a single tube leading in and out. This means that the waste material must be evacuated through the same tube the food entered before more food can be introduced for digestion. You might call this the “digestion on the instalment plan.” The waste comes out of the stomach into the intestine, which encapsulates it and moves it along till it eventually reaches the end of the intestine located at the entrance to the funnel [aka siphon]. Octopus poop, ejected from the funnel, looks a bit like a slender . . . ribbon . . . .

In giant Pacific octopuses the processing of food, depending on what is being eaten, can take many hours. On average these octopuses make six hunting trips a day, reposing in their den most of the time while they process food.”

Below, video of a giant Pacific octopus hunting. In this encounter, the octopus passes directly over a mature male Wolf Eel in his den. THEN, a Decorator Warbonnet emerges as well. 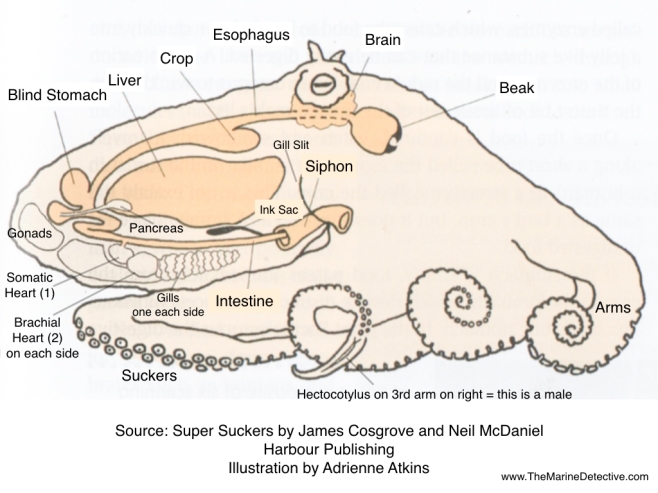 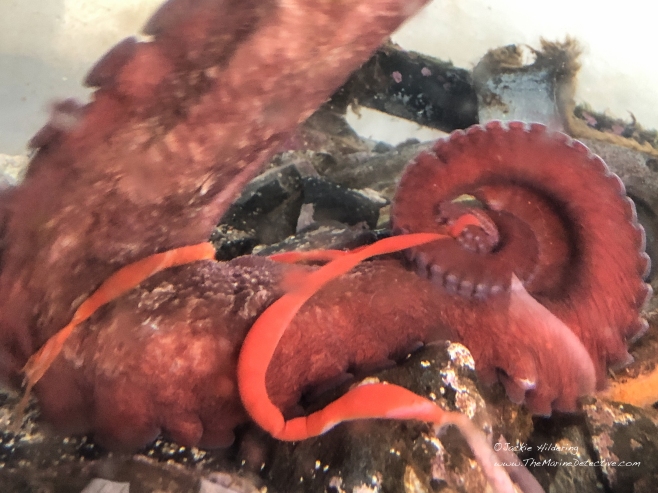 Defecation by Pearl the Giant Pacific Octopus at the Sitka Science Marine Science Center. Her diet has a lot of shrimp and crab in it and likely accounts for the colour of the faeces.

3 Responses to “How Do Octopuses Poo?”