Hers’s an unlikely combination of introspection and natural history. It’s what results when you bring together a photo of a Giant Pacific Octopus’ eye with the bad word play of “2020 vision” regarding the new year.

Introspection: In a human lifetime, you don’t get to cross the threshold into all too many decades. Like many of you, it makes me take pause . . . wanting to understand where we are and how to move forward with focus. It’s what happens when you want to make sense of a world which appears to have increasing numbers of cartoon-character-like heads of state. It makes me think about the state of heads, and how to find one’s way without despondency, denial and inaction. 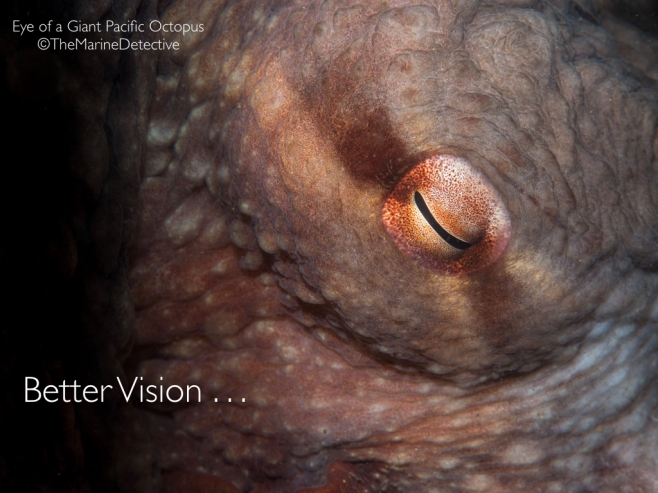 I write these words largely to solidify my resolve and vision in this decadal transition but share them here in the hopes that they may be of use to you.

And here’s the natural history and marine mystery bit relating to the photo of the octopus’ eye (note that she was in her den and that I used a zoom lens).

Octopuses and other cephalopods have only one kind of photoreceptor cell while we have rod cells and three types of cone cells allowing us to see in colour. So how can cephalopods discern colour when they have only one kind of light receptor in their eyes? And they must be able to discern differences in colour. Consider how they signal with colour and how they camouflage.

Here’s to all the colour, marvellous mysteries, clear vision, and solid action ahead.