[Note: Text below has been corrected / edited on January 5th. Corrections are marked in red.]

Marine snails have doors. Freshwater snails do too.

Some tubeworm species have them as well.

They all make an “operculum”. That means “little lid” in Latin but, I’m sticking with referencing the structure being like a door. 🙂

See the operculum in my photo of an Oregon Triton below? It’s the structure sealing off the entrance to the shell.

Oregon Triton (Fusitriton oregonensis). That’s a Sunflower Star on the left. With that species now being in such trouble, it’s a clue that this photo was taken before the onslaught of Sea Star Wasting Disease.

Oregon Tritons are a big marine snail species with a shell up to 15 cm long (and with a range well beyond Oregon ie. known from northern Alaska to northern Mexico, and Japan). You can imagine how, if the snail did not have the operculum, a predator could still get access to the snail in its shell.

Lewis’ Moonsnails are another really big snail. Their shell can be up to 14 cm wide and look at the size of their bodies relative to the shell!

Even though they can release some water from their bodies to become smaller, they clearly need a big opening (aperture) to their shell to get back in. 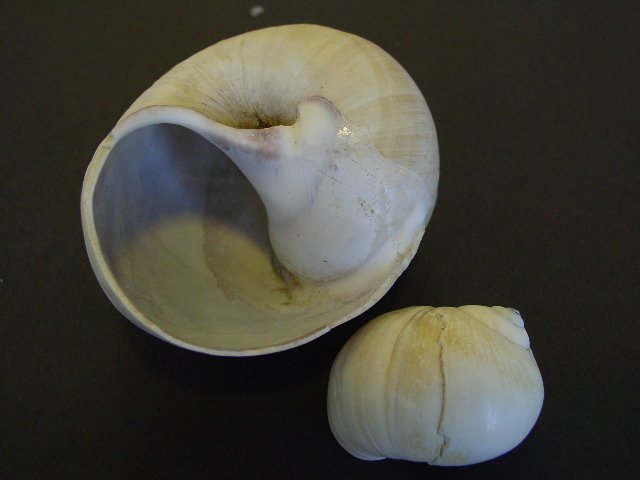 It’s a space you do not want to leave wide open. Hence, the need for making an operculum to seal that opening.

Operculum from a Lewis’ Moonsnail. Shape, strength and size is perfect to seal off the entrance.

For snail species that may be found in the intertidal zone, closing the shell with the operculum not only protects them from potential predation, it also may offer them some protection from drying out. Greg Jensen, author of Beneath Pacific Tides, thankfully offered the following knowledge correcting my previous statement about how useful the operculum might be for this purpose: “Marine snails don’t generally use their operculum to seal the shell at low tide. They snug themselves up tight to a rock with their foot.”

He also shared that land snails, who do NOT have an operculum, avoid drying out by coming out in the cool of night or when it is otherwise damp. Another adaptation is that, when it gets too dry, they glue their shells onto a hard surface, sealed shut with dried mucous to retain moisture. 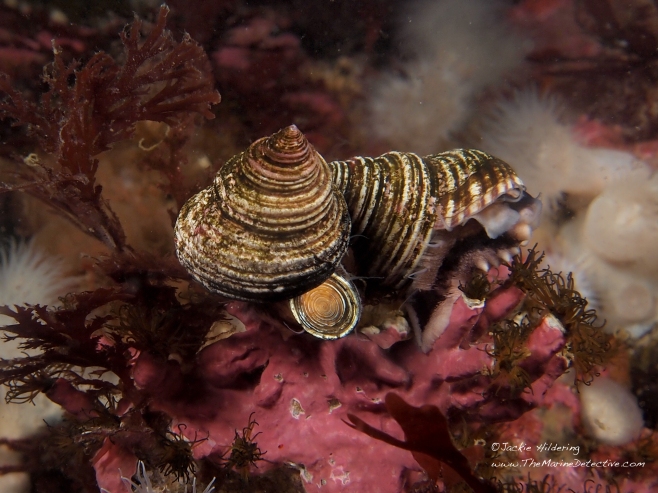 Blue Topsnail with operculum (Calliostoma ligatum, shell to 3 cm across). Even really tiny marine snail species like Common Periwinkles have an operculum.

Leafy Hornmouth closing up with the operculum visible at the end of the snail’s foot (Ceratostoma foliatum, shell to 10 cm long). There’s a Three-Line Nudibranch on the upper right. 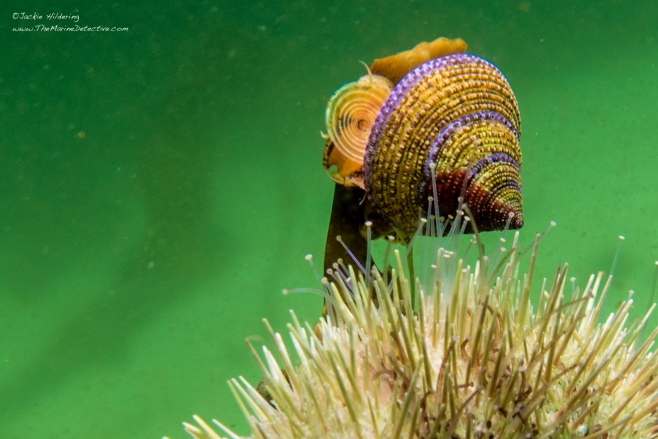 But what about hermit crab species who use the snails’ shells once they die? Since the operculum was attached to the body of the deceased snails, are the hermit crabs left with a wide open door?  Oh just look at how amazing nature is in making sure they too are protected within the shell. The photo below shows you why so many marine hermit crab species have one claw bigger than the other. The bigger claw seals off the entrance in lieu of the operculum! 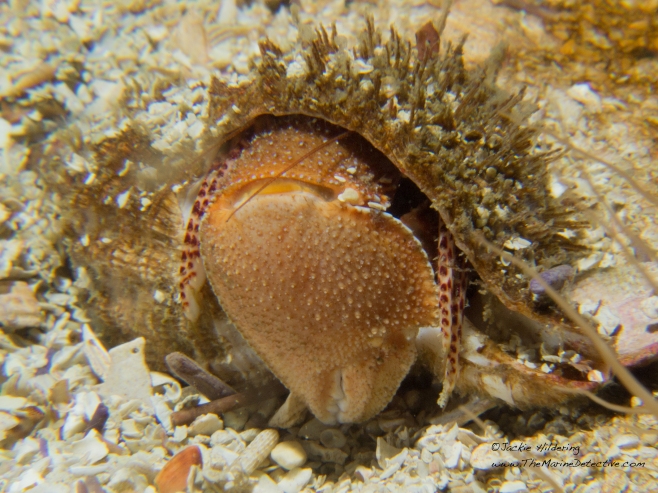 Not all marine hermit crab species have this adaptation. Other options include choosing a smaller shell so you can “shake it off” and run like hell when threatened. It’s called the Taylor Swift strategy. I’m kidding! But let me know if you get the pop star word play.

I also mentioned that some tubeworm species make an operculum. See below. In the centre of the image there is a Red-Trumpet Calcareous Tubeworm (Serpula columbiana to 6.5 cm long). 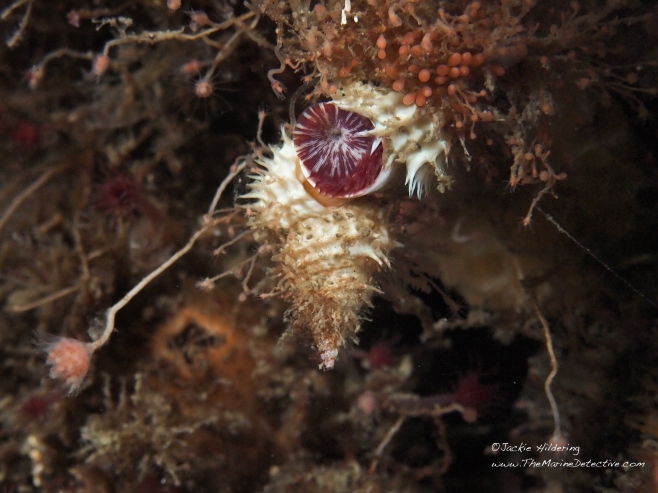 As a tubeworm, the species captures plankton drifting by with its crown (radioles). As the common name indicates, the operculum in this species is trumpet shaped. For the individual in the photo, the operculum is purple with white stripes.

I had initially stated that there’s a really good reason for this species to have the door and you are looking right at it. Those snails are kleptoparasites. “Klepto” as you likely know, means to steal (from ancient Greek). The Checkered Hairysnails use their long mouthparts (the proboscis) to try to suck up the food the worm captures before it gets to the worm’s mouth. HOWEVER, what I also learned from Greg Jensen is that the theft by the Checkered Hariysnails is apparently so stealth, that the tubeworm does NOT respond to their mouthparts by closing its operculum.

Thereby, the operculum may help these tubeworms protect their crown (and other body parts) but does not protect them from kleptoparasites.

But YOU know what to do.

There are times however where you want the door wide open IF you are a marine snail. The additional photos below include that information. 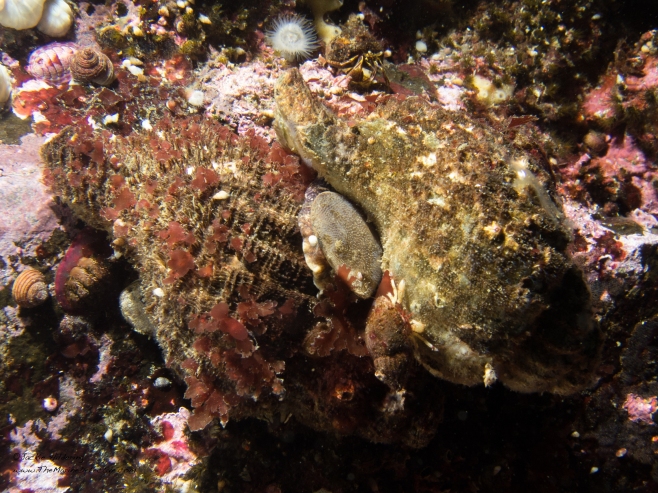 Oregon Tritons mating. That’s a time when you want opercula out of the way. Unlike may humans, they must mate with the door wide open. 😉

Two other Oregon Tritons mating, opercula to the side. Like the mood lighting? You’re welcome. 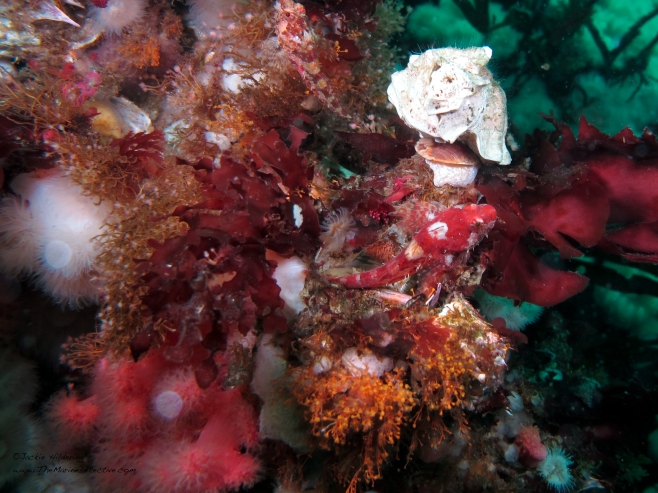 Another Leafy Hornmouth with operculum visible at the bottom of the snail’s foot. And yes, there’s a Scalyhead Sculpin here too. 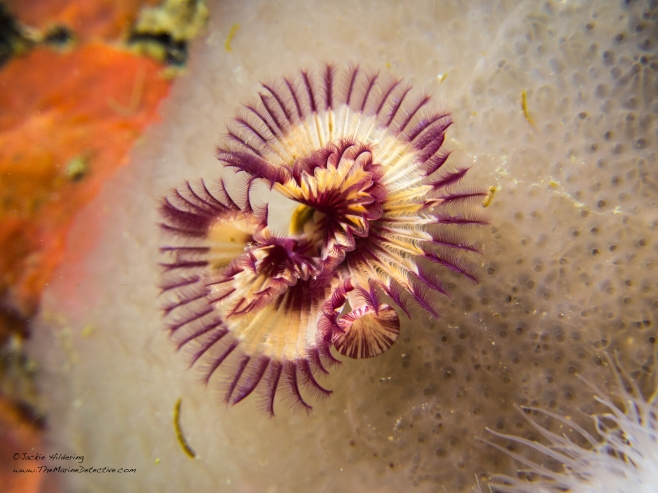 Another Red-Trumpet Calcareous Tubeworm. This one is out of its tube. There’s great diversity in colour in the species. See the trumpet-like operculum on the right? 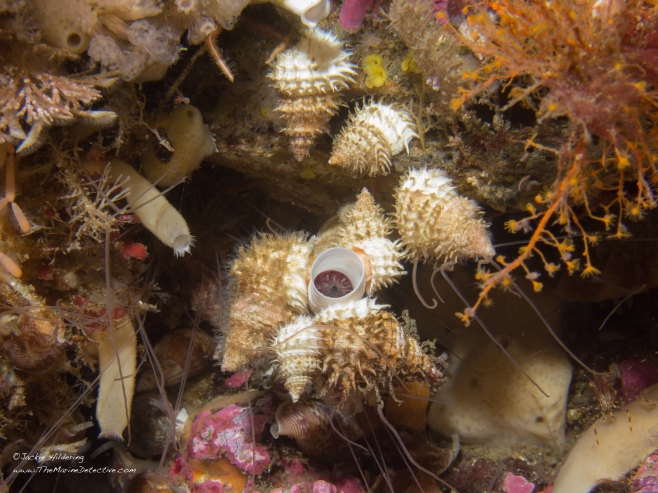 Oh oh. This Red Calcareous Tubeworm has 7 kleptoparasites near!

6 Responses to “Shut the Door!”