Update: Fisheries Notice March  25, 2019: “ROCKFISH DESCENDING DEVICES The use of a descending device is now required by condition of licence to assist in the conservation and survivability of rockfish being returned to the water. Because of their closed swim bladders, rockfish brought to the surface suffer barotrauma, causing the swim bladder to inflate and reducing the probability of their survival upon release. Handle catch as little as possible, using wet hands to preserve the protective slime coat, and return to the water at depth of capture as quickly as possible (under two minutes). To avoid catching rockfish, move to another fishing location.”

Here’s another case of a photo being worth a thousand words.

It is of a Yelloweye Rockfish that has died from barotrauma, also known as “pressure shock”.

Many rockfish species are particularly sensitive to reductions in pressure since the air in their swim bladders expands substantially. The swim bladder is a buoyancy control organ and even when slowly reeled in from a depth of only 20 m (60’), a rockfish’s swim bladder can expand to three times its size, putting pressure on the fish’s organs.

As is the case with the Yelloweye Rockfish in the photo, the swim bladder can expand to the point of causing the fish’s eyes to bulge out of their sockets and its stomach to be pushed out of its mouth. I know this is likely a sight that may not enhance your appetite for your rockfish catch but please read on since, contrary to the thinking of many, this IS reversible whereby the rockfish stands a good chance of survival. 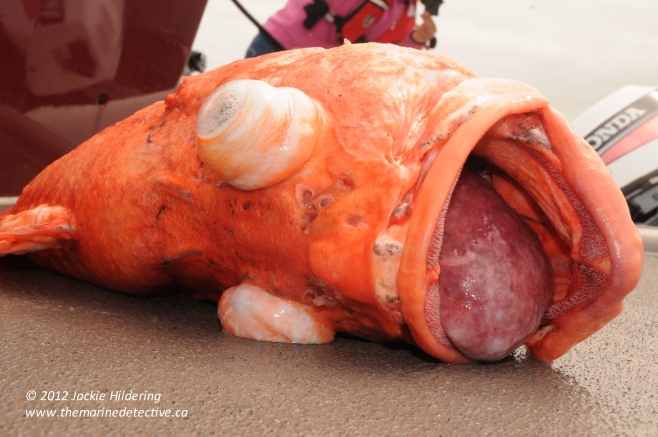 Yelloweye Rockfish that has died of barotrauma. Reduced water pressure causes the air in the swim bladder to expand and push out the stomach and eyes. BUT this is a reversal condition whereby the fish can survive through use of a “fish descender”. Photo: Hildering.

Colossal management errors were made with overfishing slow-growing rockfish. Many species are extremely long-lived, slow to sexually mature, and the big, old females are the most fertile – producing the most eggs and hatching the largest number of healthy young.

For example, Yelloweye Rockfish are believed to have a lifespan of up to 118 years. They don’t reproduce until they are at least 12 years old, and the old females can incubate up to 2.7 million eggs!

This means that species are very slow to reproduce whereby, if you catch lots, especially the big females, you can devastate populations very quickly.

Another nail in the coffin of rockfish is that many adults also have high site fidelity so that by fishing one area, you can wipe out a community of fish. This is why Rockfish Conservation Areas (RCAs) are essential, where it is illegal most often to do any hook and line fishing (see restrictions here).

But, what is you accidentally catch a rockfish outside these areas and do not wish to retain it, or you have already caught your fishing limit?

There are studies that prove that if you were to quickly recompress the fish, it would stand a very good chance of survival, even where it appears dead at the surface (see video below). The fish could be brought back to depth with barbless weighted hooks, commercial “fish descenders” (cost is only about $6). Note that it is of course better

Or you can even use an inverted, weighted milk crate! See clip below.

How wonderful it would be if more people would undertake the effort to recompress the fish, knowing how dire the situation is for many rockfish species. Imagine the further positive impact if people would choose to return the depleted species to depth even when they haven’t reached their catch limit, especially the big, highly productive females.

But, even if there was to be such enlightenment, many rockfish populations are so depleted that they need far more protection.

Again, Rockfish Conservation Areas (RCAs) are essential. These should be areas known to be the territory of depleted rockfish populations. Since these are no-fishing zones, there is no chance of barotrauma and the rockfish populations that live in the area are given the time to rebuild to have more sexually mature fish and more big old super mamas.

In summary – it’s so easy to make a positive change: (1) respect Rockfish Conservation Areas knowing that you usually cannot do ANY hook and line fishing there; and (2) invest in a fish descender for rockfish caught outside RCAs.

Fantastic video showing how rockfish that appear dead at the surface due to barotrauma fully can revive at depth! From the Coastside Fishing Club:

Video from Alaska Department of Fish and Wildlife showing a summary of homemade and commercial fish descenders.

Entertaining and super informative video “How to save a life – a rockfish life” by fish guru Milton Love with a rap song by Ray Troll:

Leave a Reply to The Marine Detective Cancel reply