Meet the fish that so often has people exclaiming “It lives HERE?!”

Yep, the tiny grunt sculpin is a powerful ambassador for raising awareness about the depth of biodiversity hidden in the cold, dark, rich waters of the north east Pacific.

We are programmed to associate warm waters with exotic-looking fish species but read below for the Grunt Sculpin’s astounding adaptations and masterful mimicry.

The species reaches only a maximum of 9 cm.

It is adapted to look like a giant barnacle (Balanus nubilis)!  When facing outward, its pointy nose looks like a closed giant barnacle and when the fish turns around, its tail looks like the foot of the barnacle that rakes in plankton.

Adapted to look like a giant barnacle! Huge thanks to dive buddy Natasha Dickinson for finding this one. Photo: Hildering.

This little fish has giant attitude. When not hidden away in a barnacle (or a cup, see photo), it can be highly territorial, hopping around on its pectoral fins in a strutting, jerky fashion. A lot of literature reports that the grunt sculpin is an “awkward swimmer” but I solidly disagree. I once saw one flash away with lightning speed back to its hiding place. Yes, I was being an annoying photographer.

If you can’t find an empty barnacle shell. A cup will apparently do! Photo: Hildering

Ah and you probably think the males are the master strutters? Ha! The female is as fierce as can be. She will aggressively chase a male into a crack, an empty barnacle shell, or other place of no escape and guard him there until she is ready to lay her eggs. When she has laid them, the male is released to do his duty.

She watches him to ensure he fertilizes the eggs (up to 150 at a time) and then, according to some sources – she saunters off but may return once in a while to take on a shift.  For many members of the sculpin family, the males are the sole egg guarders.  However, there are also reputable sources that report that the female grunt sculpin guards the nest of eggs.

Very young grunt sculpin. The red-gilled nudibranch in the upper part of the image is only about 2 cm long. Another great find by dive buddy Natasha Dickinson. Photo: Hildering.

It may even get to be more remarkable, one source relays that when the eggs are near hatching, the guarding grunt sculpin takes them into their mouth and spits them out into the open water. The suggestion is that this causes the eggs to hatch and the little zooplankton are sent on their way. (Source: Aquarium of the Pacific).

With regards to classification, the scientific name Rhamphocottus richardsonii reflects the Greek “rhamphos” for the grunt sculpin’s bill-like snout. This makes some people think that the species looks like a seahorse but note that they are not closely related at all. The grunt sculpin is the only member of its genus. It is truly one of a kind. 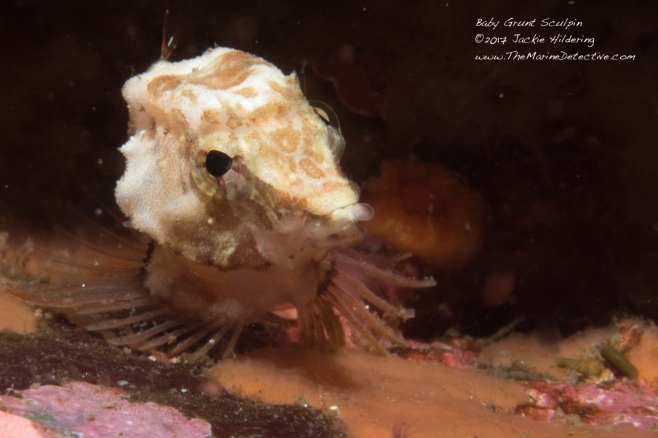 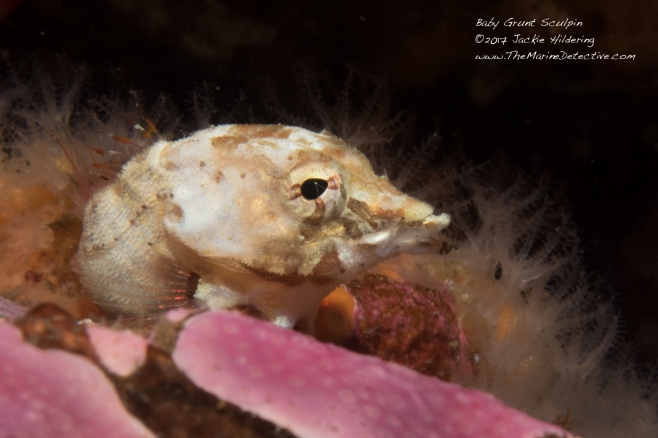 Oh, and the name “grunt” sculpin? Apparently the species grunts when it is taken out of the ocean. You would too! Likely it also grunts when being defensive underwater. It is also the sound I make in my delight when I find one. It will be a very loud grunt indeed if I ever find one guarding eggs or with its tail-end extended out of a barnacle.

Another very fortunate find of a grunt sculpin in a empty barnacle shell. Photo: Hildering 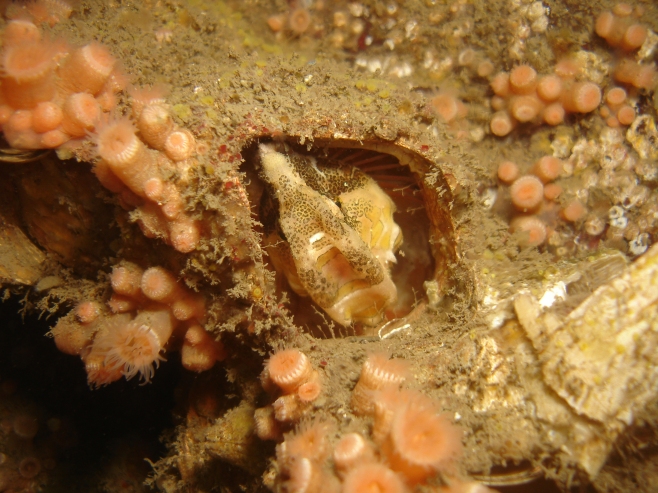