I am typing with salt still encrusted to my face and hair. I really should warm up from my dive and wash off the NE Pacific before sharing this with you but this is the kind of story you want to shout from the seamount tops. However, be warned, there is a bit of a dark side to the story too.

Today, while doing a shore dive in Port Hardy with the intention of surveying the health of sea stars*, I had the most wondrous experience I have ever had with not one, but two giant Pacific octopuses.

While photographing a sea star I must have disturbed the first octopus because when I looked down, wondering what had caused a massive disruption of hooded nudibranchs from the kelp, there she/he was in full glory – posturing to show me his/her impressive size, hooded nudibranchs undulating all around.

I even ended up with a hooded nudibranch stuck to my mask, which I gently shook off as I am a poor surrogate for kelp!

After I recovered from the shock of this all and  mumbled an apology in the guilt of triggering the chaos, I looked at the octopus for a bit  . . . and she/he looked at me. We both settled down, apparent in the case of the octopus in that he/she was no longer posturing and reverted to camouflage colours rather than alarm vibrance.

After some minutes, the assessment appeared to be made by this sentient being that I was not a risk; and that there was no need to hide (nor ink!). As a result, for half an hour I was able to (respectfully) follow along as the octopus hunted.

I was allowed to learn about hunting strategy and see how the colour and texture changed as it moved and how the mantle would flash white as it pounced upon prey.

The only thing that stopped this deeply awe-inspiring experience was that dive buddy, Alex Spicer, found a second octopus in the open!

This much smaller octopus was using giant kelp like a hammock.

The divers among you know what a rare gift it is to find one, let alone two, (unhabituated) octopuses out of their dens, certainly during daytime.  The underwater photographers and videographers among you would be twitching all the more, knowing what an incredible opportunity this offers to capture the beauty of these giant wonders.

Here’s the dark side. Thankfully it is a literal dark side. My strobes (flashes) didn’t work properly and it was my own doing. It’s been a crazy week of work and, in the flurry resulting from wanting to fit in a dive, I forgot the cables that hook the strobes to the camera.

Yes, I was given what may be the opportunity of a lifetime but failed to fully capture the beauty of it, leaving you with only the grainy images below. However, I got to fully live the experience and had anything changed in the course of events that led to today’s dive, likely I wouldn’t have been octopused at all.

I hope the images are still enough to illuminate the joy and wonder I felt.

[Be sure you scroll down for the photo of the little guy in the kelp hammock!] 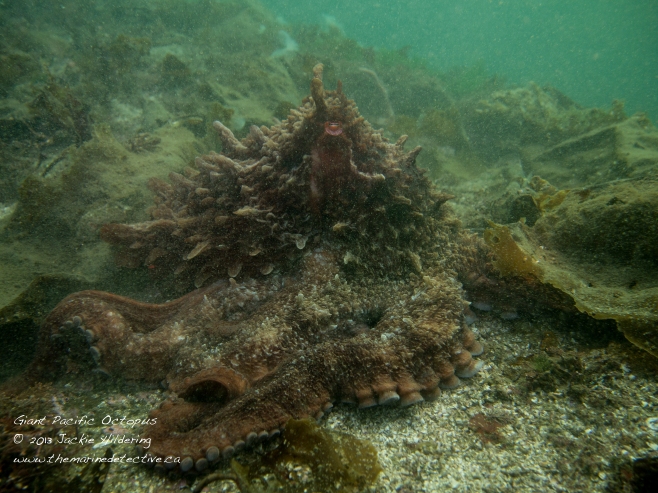 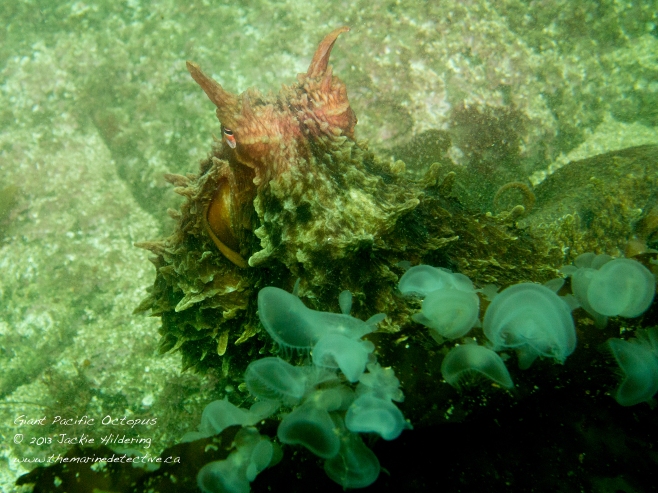 Getting checked out by Giant Pacific Octopus #1. Hooded nudibranchs in the foreground. © 2013 Jackie Hildering 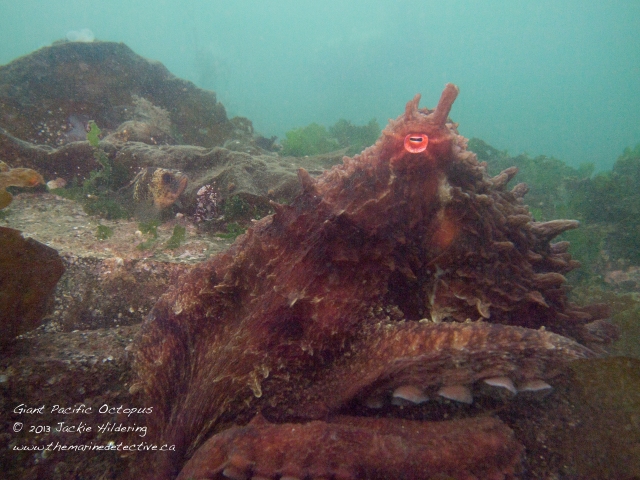 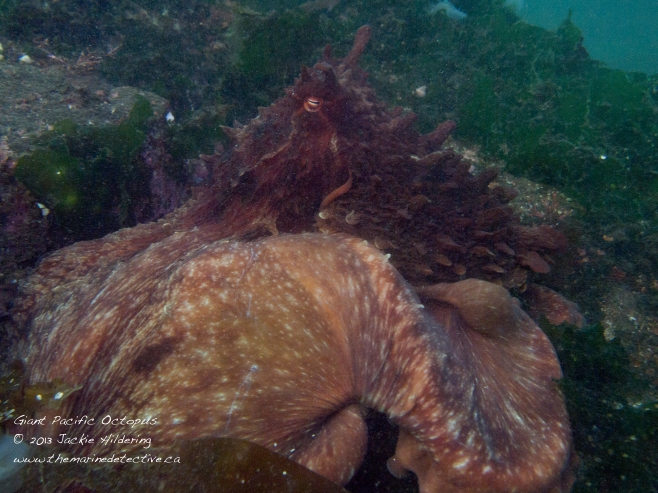 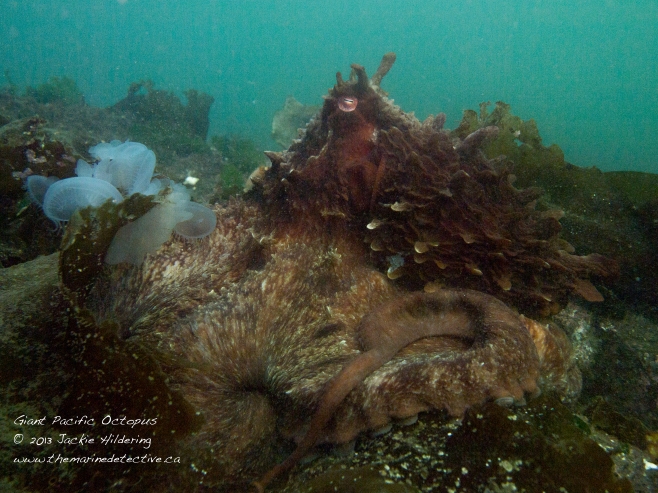 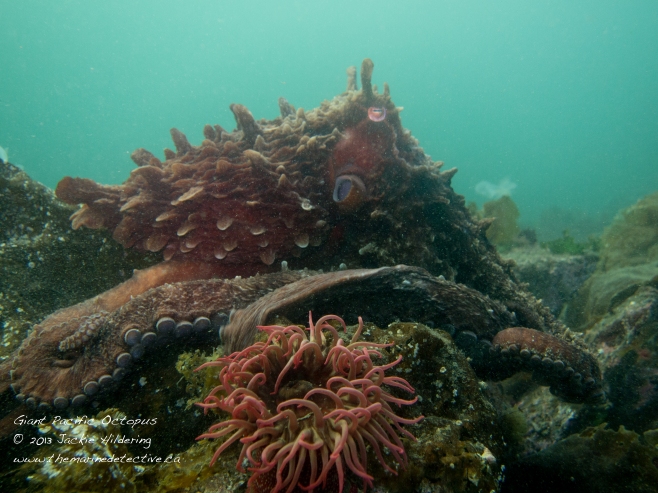 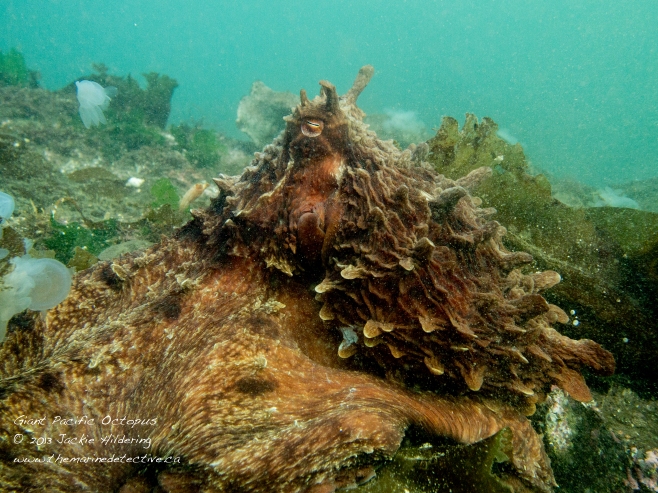 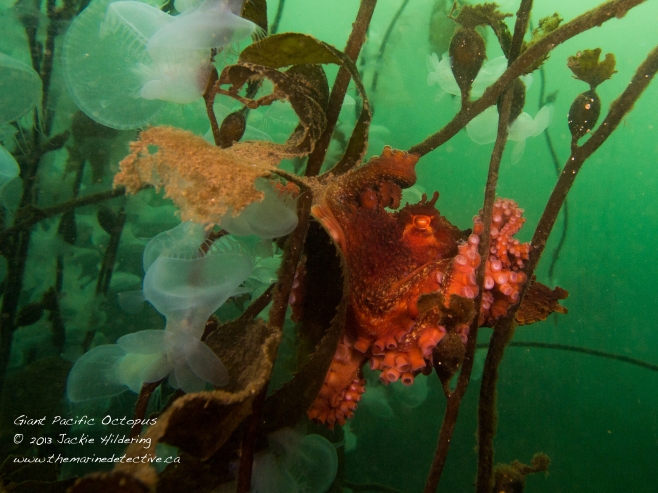 Giant Pacific Octopus #2 – much smaller and using the giant kelp as a hammock. © 2013 Jackie Hildering

[*On this dive there was no evidence of Sea Star Wasting Syndrome but I have now documented its presence. See these blog items.]

9 Responses to “Octopused! A story in grainy pictures.”