[Update March 2018 – There has been a reclassification of this species of nudibranch whereby Hermissenda crassicornis  is also being referenced as the “Thick-Horned Nudibranch. Please see my blog at this link for that information.]

This is an Opalescent Nudibranch (Hermissenda crassicornis). 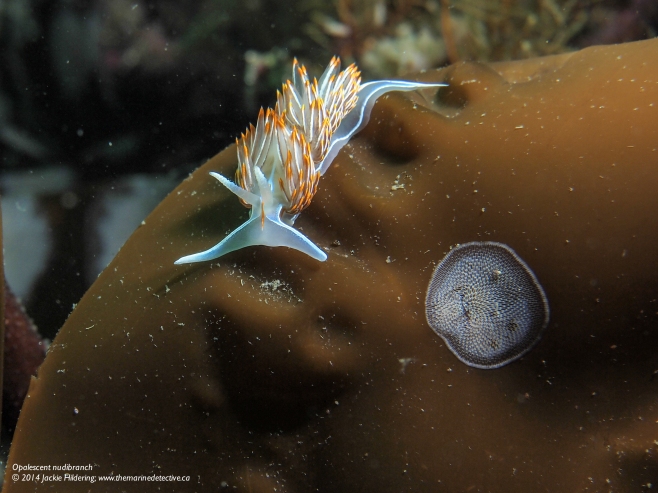 Opalescent nudibranch – species up to 8 cm long. The white patch on the right is a colony of animals known as “kelp-encrusting bryozoan”. © 2014 Jackie Hildering; http://www.themarinedetective.ca

Here is one climbing giant kelp with hooded nudibranchs in the background. 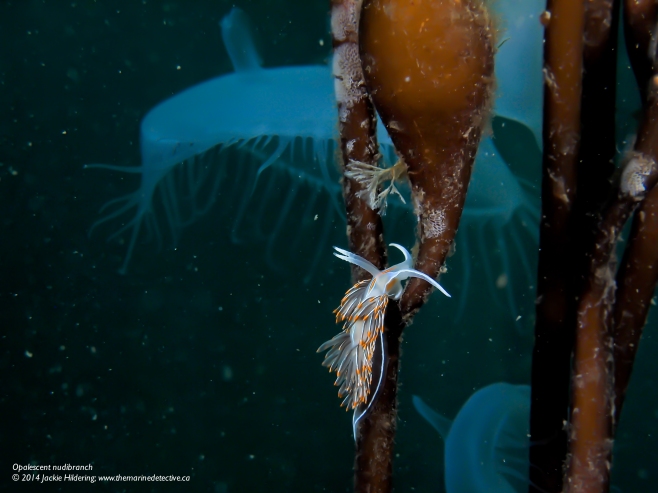 I know! Aren’t they astonishingly beautiful? Opalescent Nudibranchs are one of the most powerful ambassadors for shattering the misconception that warm waters are home to more colourful life. They truly help in raising awareness about the incredibly exotic and vibrant life hidden just below the surface in the dark, rich, cold waters of the NE Pacific.

But they help with something else too.

I recently received a video clip of Opalescent Nudibranchs from Tavish Campbell, taken while with Pacific Wild documenting the life that would be at risk if tanker traffic came to Caamano Sound. Tavish, who is a fellow-diver and appreciator of all things marine, asked, “Hey Marine Detective, what’s going on here?!”  What I saw led me to realize how this species is also a very powerful engager for addressing another default notion we humans seem to have.

We tend to bestow judgemental labels on animals depending on our interpretation of their beauty.  We are inclined to think beautiful animals are “nice”, “cute” and “benign”, and foreign looking animals are “mean”, “ugly” and/or “bad”.

While I appreciate that some organisms may be more aesthetically pleasing than others, there is no “ugly” in Nature and there certainly isn’t “bad”.  Organisms look and live as they do because it works. Their appearance and behaviours are the result of expanses of time longer than we humans, as newcomers, can truly appreciate. Organisms’ adaptation allow them to survive and fulfil their niche in Nature’s puzzle so that there is the greatest chance of balance. [Insert “God” instead of “Nature” if this is your preference.]

Therefore, for example, there are no “bad” kinds of orca but rather orca populations whose job in Nature is to eat other marine mammals. There are dolphins that sometimes kill other marine mammals without this being for the purposes of food (no matter how much this conflicts with the “Flipper-like” identities we have imposed on them). Sea otters do things that definitely are NOT cute and .  . . it also means that beautiful sea slugs will also do what they need to in order to survive.

I take such comfort in not needing to judge Nature. It just is. In contrast, human behaviours too often do NOT enhance the potential of balance in Nature or even the chances of our own survival.

Opalescent Nudibranchs in all their beauty, are extremely voracious predators and, as is evident in the video, will also attack their own kind. Reportedly, fights most often result when the animals come into contact head-to-head. The animal closest to the head or end of the other has the advantage of getting in the first bite and thereby the greater likelihood of killing their opponent and eating them.

But, they are hermaphrodites, they need one another to mate! As hermaphrodites, there is not even male-to-male competition for females! So why, when your chances of finding a mate as a sea slug are already pretty limited, would you kill another of your kind instead of mating with them?

I hypothesize that it would have to do with the balance between needing to eat and needing to mate and/or that there is some sort of genetic competition going on. That’s all I got. Insert rap awe and wonder here. I may not know why they do what they do but I do know, there has to be an advantage to their survival.

What I also know for sure is that this gives a whole new meaning to “slugging it out”! 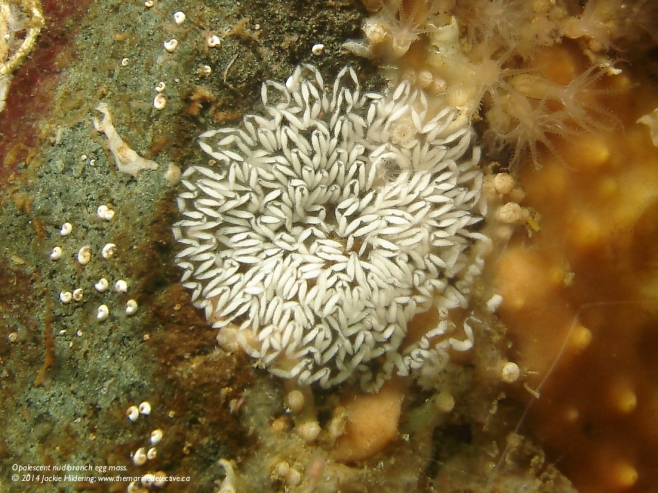 6 Responses to “Attack of the Sea Slugs!”