This is an open case; one that has me bemused and amused.

While recently diving near the Great Bear Rainforest in Jackson Narrows as part of my involvement with Pacific Wild’s SEAS program, my buddy Tavish Campbell came upon a Giant Sea Cucumber in this very unusual position (Parastichopus californicus aka California Sea Cucumber).

It was stretched straight up and down, head end up.

As you likely know, this species is most often horizontal; “face” down cruising up to around 4 meters a day along the ocean bottom, mopping up nutritious particles with mucus-covered bushy white tentacles. When there is good stuff stuck on the tentacles, these retract into the mouth (with sandy casts coming out the other end).

A Giant Sea Cucumber in its usual position, horizontal so that it can feed by mopping up particles. This one has a nudibranch crossing over it (Flabellina trophina). ©Jackie Hildering

So why would this individual assume such a remarkably vertical position? Could it be feeding related? It was extending and retracting its mouth tentacles repeatedly but clearly this was not effective in gathering any snacks.

My best hypothesis is that this was mating related. Giant Sea Cucumbers have separate sexes and rise up in a python-like position to release their sex cells (see figure below from A Snail’s Odyssey). This pose reduces the number of sex cells that settle to the ocean bottom, unfertilized.

Additional strategies to enhance the chances of fertilization are to twist back and forth and/or intertwine with a partner while releasing gametes. (This species will also catapult back and forth when trying to escape predation by Sunflower Stars).

Striving to ensure your DNA gets passed on does not happen randomly however. As with all broadcast spawners, there is a cue so that the release of sex cells is coordinated. (See previous blog “Sea of Love – Broadcast Spawning“). Giant Sea Cucumbers are known to mate in the shallows from April to August repeatedly “dribble” spawning).

Our high-reaching Sea Cucumber friend was indeed in the shallows and it was significantly warmer there. Was the temperature a cue that it was time to mate? Was s/he trying to sense the presence of a partner or others of his/her kind already broadcasting?

Was s/he reaching to new heights to allow even better distribution of sex cells than the python pose?

Was this individual even old enough to mate as they do not sexually mature till age 4? It’s size certainly suggested it was older since maximum size for the species is reported to be 50 cm.

Had we had more air we could have waited and likely concluded what was up with this behaviour.

As is so often the case however I surfaced with even more questions and a greater sense of wonder about the life below. And yes, this time it may be that I was laughing so hard I was sputtering sea water as well. 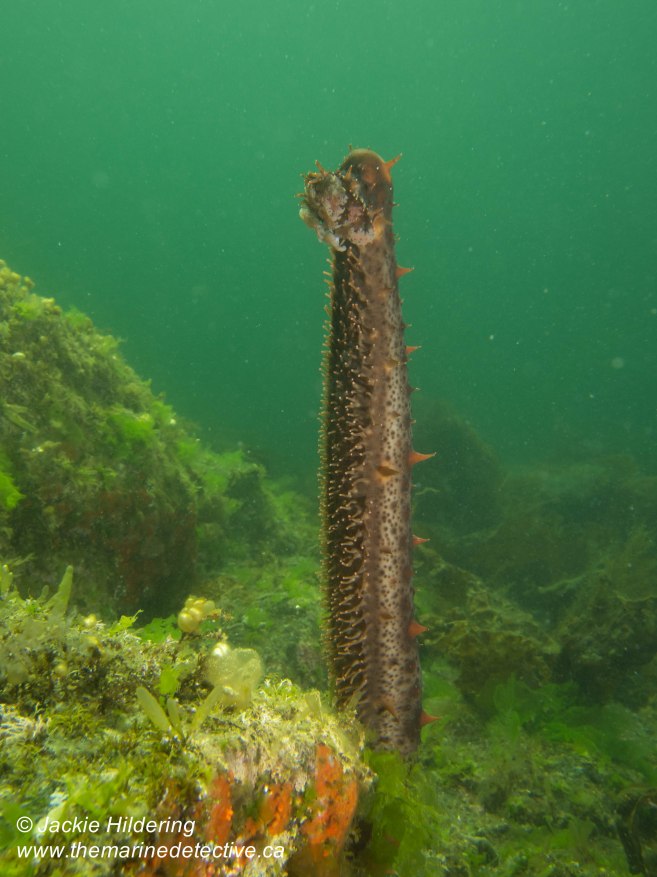