It has just come to my attention that there are two applications for tenure for tidal turbines in killer whale critical habitat. This last arose in November in 2012 with my posting the blog “Tidal Turbines in Whale Epicentre? Hell No!”. The resulting media coverage, your action and the ethics of the applicant resulted in that application being withdrawn.

With these two new applications, your action is again very much needed.

Below, I have edited my November 2012 blog to be applicable to these applications and hopefully I have succeeded in making commenting very expeditious for you.

There are times when expletives like “Hell No!” are justified and I am sure you will agree this is one of those very unfortunate times and – your action is needed.

There are two applications for “OCEAN ENERGY / INVESTIGATIVE AND MONITORING PHASE” by Weyl Power Ltd. If accepted by the BC Ministry of Forest, Lands and Natural Resource Operations (MFLNRO), this would allow the instalment of technical and investigative monitoring equipment in killer whale critical habitat which could then lead to turbines also being located there.  I believe the applications are still referenced as “licenses of occupation“.

See the map for the location of the proposed Weyl Power sites relative to resident killer whale critical habitat as per the Recovery Strategy for Northern and Southern Resident Killer Whales in Canada. 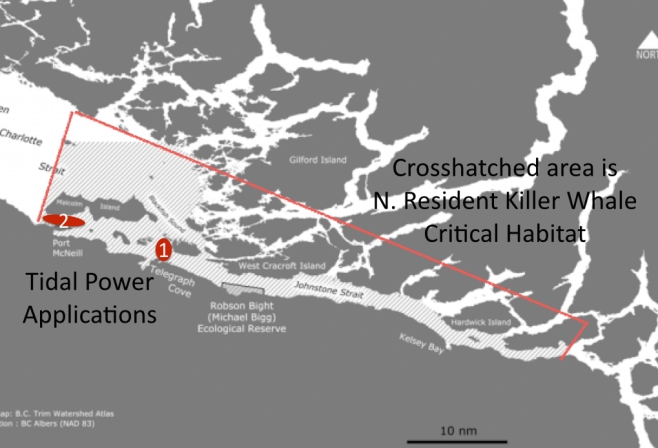 While I of course support initiatives to reduce the use of climate-changing fossil fuels, to have turbines in critical whale habitat would be pure, simple, total, utter insanity. No matter how advanced the turbine technology, no amount of mitigation could compensate for the noise, prey reduction, and other disturbance to the whales.

One would hope that government agencies would surely deny the applications, especially after the public outcry after the similar 2012 application in this same area.  However, we have many examples of this being tragically misplaced faith and cannot count on there being any legislation in place for sound environmental assessment that would confirm environmental impacts. Note that the federal government had to be taken to court TWICE to be ordered to acknowledge and protect killer whale critical habitat – first ruling December 7, 2010; appeal ruling February 9th, 2011.

The very ocean current that makes this area of interest for staking a claim for ocean energy is what makes this such a rich area for marine life. The importance of this area for killer whales can be supported by almost 4 decades of data collected by Department of Fisheries and Oceans and the OrcaLab.

Therefore, we collectively need (again) to make our “Hell No!” heard.

Please comment by the April 9th deadline by going to these two links and scrolling down till you see “To comment on this application please click here”.

Sample text: “With regard to Land File Numbers 1414321 and 1414325, the applications for Weyl Power Ltd’s “OCEAN ENERGY / INVESTIGATIVE AND MONITORING PHASE” in the Broughton Strait to Johnstone Strait area, I write you to express that these applications for tenure must not be granted. The applications are in scientifically confirmed critical habitat for northern resident killer whales and it has been legally ruled that this must be protected as per Canada’s Species at Risk Act. In addition, the area is of great importance to humpback whales and many other marine species.  No matter how advanced the turbine technology, no amount of mitigation could compensate for the noise, prey reduction, and other disturbance to the whales and to approve these applications would be in direct conflict of Objective 4 of the Northern and Southern Resident Killer Whale Action Plan for Species at Risk which is to “Protect critical habitat for Resident Killer Whales and identify additional areas for critical habitat designation and protection”. It is also unacceptable that the public is not provided with information on these applications other than the applicant name and the maps i.e. no information about design or environmental assessment process.”
You may even want to reference this blog and provide the link e.g. “For further details of the reasons for my great objection to this application see the rationale and resources provided at http://wp.me/pPW6V-1cJ.

8 Responses to “Surely Not Again?! Tidal Turbines in Whale Epicentre? Still Hell No!”