It happened when we placed a memorial for a dear departed friend, Markus Kronwitter.

My primary reason for sharing this is for Markus’ family and friends but, I think others will find something here too.

You see, a Giant Pacific Octopus attended and sat right atop the memorial. 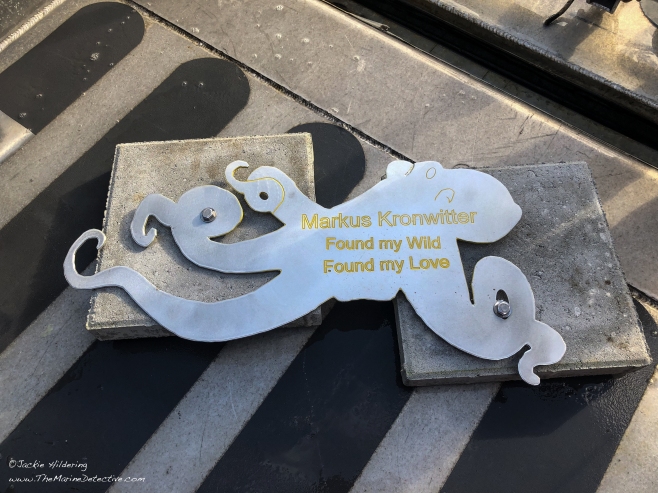 Memorial made by Stephanie Lacasse.

Markus owned and operated North Island Diving in Port Hardy. He was a dear friend and incredibly important to our dive club, the Top Island Econauts. He died more than 3 years ago and the memorial today was to honour him and maybe offer some comfort to his wife Cecelia and his two daughters, Rosie and Jennifer.

The location was Five Fathom Rock just outside Port Hardy.  Part of Markus’ legacy is that he fought for this rocky reef to be recognized as a Rockfish Conservation Area. (More about the significance of that in my eulogy at the end of this blog).

After we shared thoughts about Markus at the surface, down we went to the highest point of the reef. We would wait there till the memorial was carefully descended by Steve Lacasse of Sun Fun Divers using a lift bag and rope.

We wanted to position the memorial there, near a sunken metal beer keg. The keg used to be a mooring float on this site. It was put there by Markus but, by mysterious means, had sunk to the bottom.

As soon as we got to where the memorial was to be placed, I saw a Giant Pacific Octopus, fully out in the open. 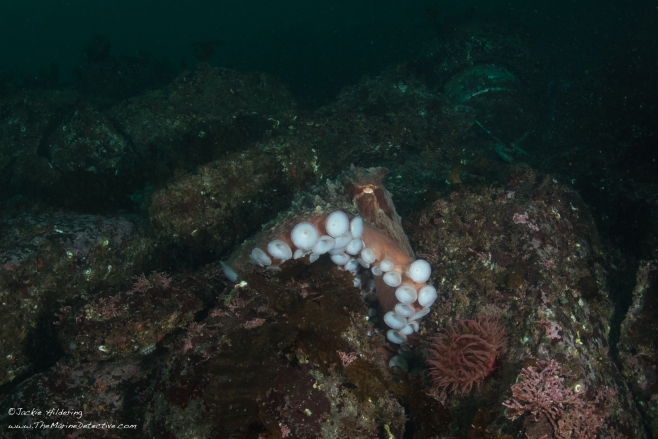 You can even see the beer keg right in the background. 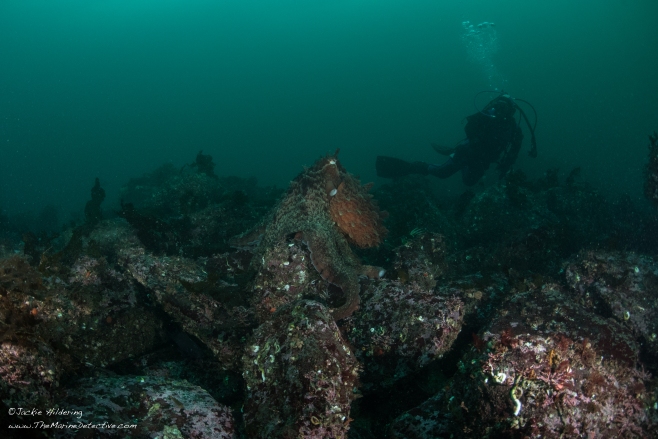 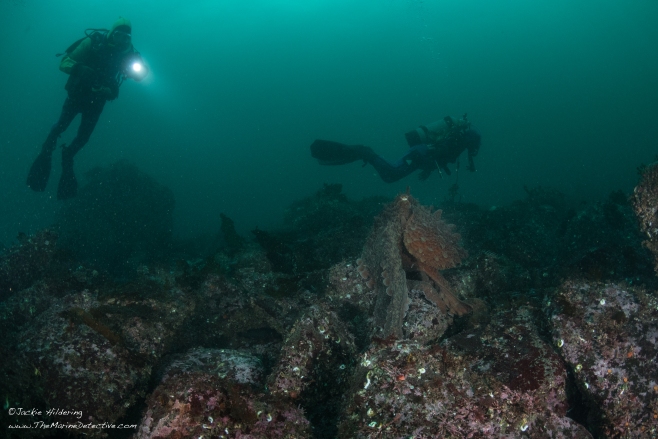 After about 5 minutes, he retreated partially into his den, likely because of some annoying underwater photographer with flashing lights.

Note that I do know this was a male Giant Pacific Octopus because the third arm on the right was a “hectocotylus arm”. Only males have the hectocotylus which stores sperm. More on that at this link. (This individual also had an injured arm. It was only about half length but will regrow. Yes, some of the awe that is octopuses, is that they can regenerate limbs. 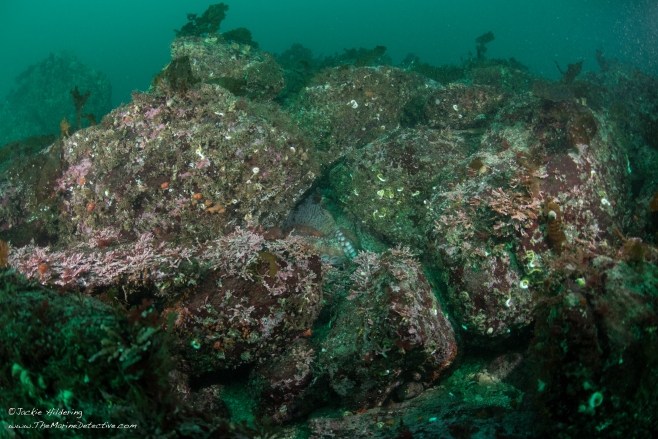 Giant Pacific Octopus in his den.

But then . . . when Steve arrived with the memorial, the Giant Pacific Octopus darted out of his den, landed right atop the memorial and started flashing white. See the memorial under the octopus in the photos below? 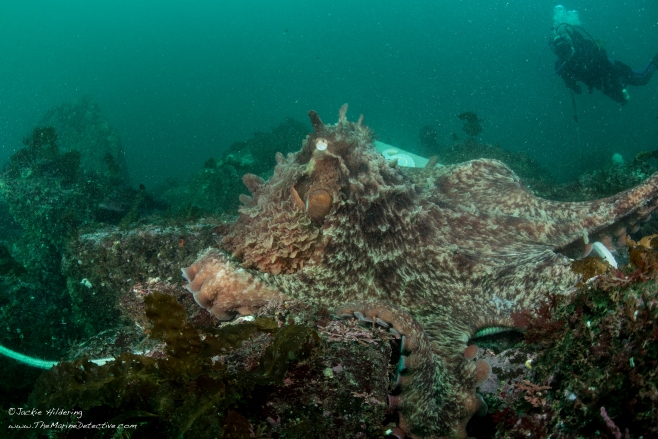 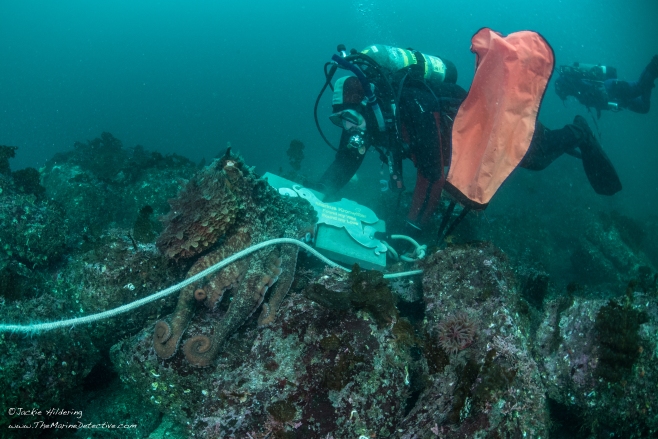 Steve Lacasse with the octopus on the memorial which was still attached to the rope and lift bag. 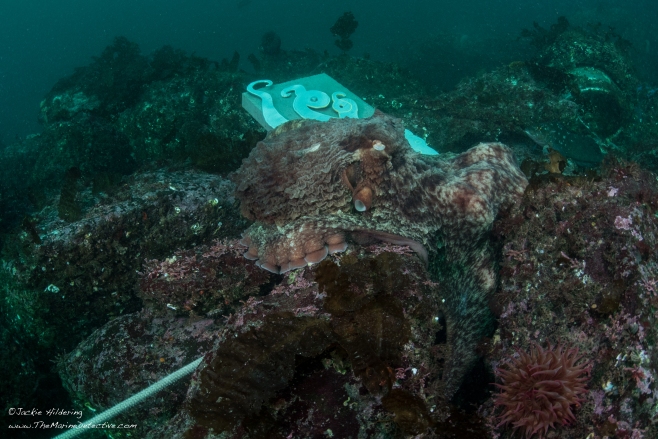 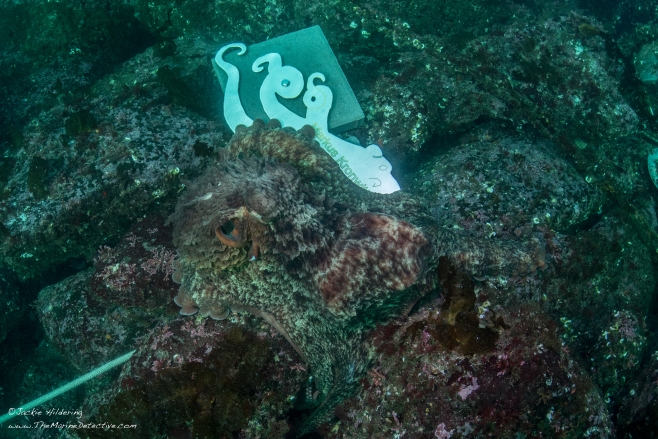 You can imagine how we marvelled as this unfolded and that some pretty big emotions were felt.

Eventually, the Giant Pacific Octopus moved away. Then, the memorial could be positioned as we had intended, but not before a mature male Wolf-Eel also went swimming by.

There’s no photo of that I am afraid. I was a little overwhelmed. 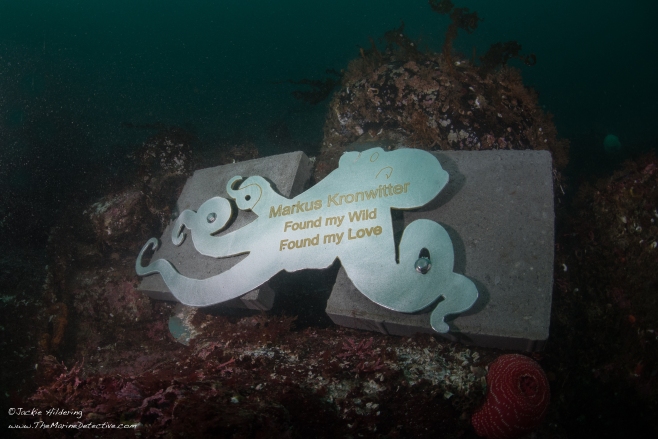 Somewhat dizzied by emotion, we continued with the dive.

Below, I include some photos of what we saw, especially to give Markus’ loved ones a sense of what this site is like and what he fought for. 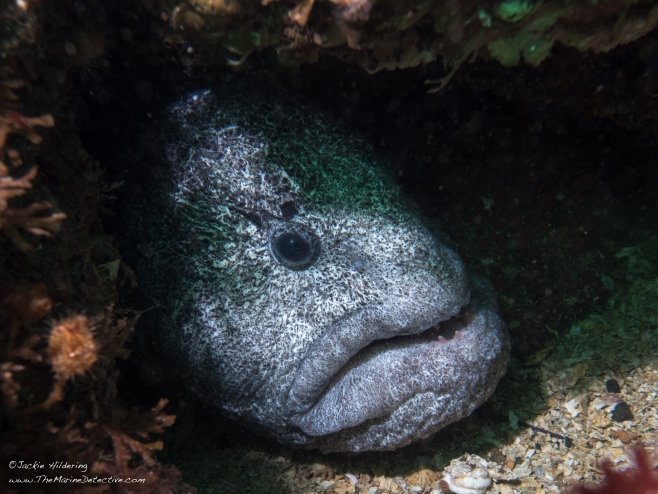 Mature male Wolf-Eel in his den, very near the memorial. 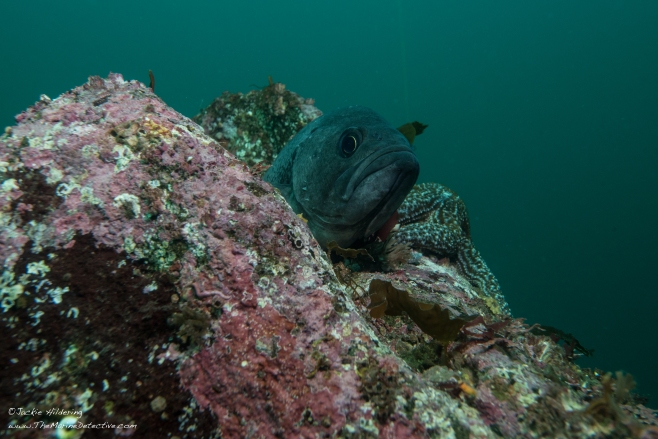 One of 100s of Black Rockfish at this site (and a Mottled Star). 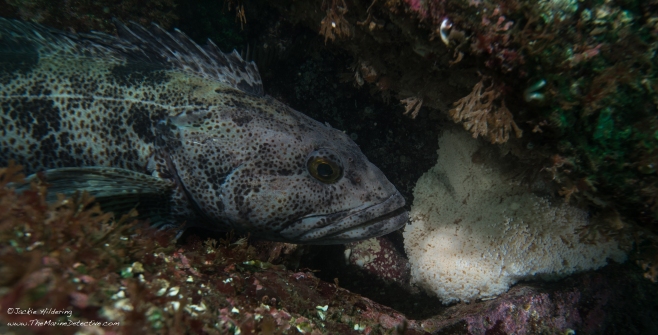 Male Lingcod guarding an egg mass with 100s of eggs. Male Ling Cod. The boulders here give an indication of why this is such ideal fish habitat. There are so many crevices to hide in and rocks to lounge upon. Rose Anemones aka Fish-Eating Telias. Sun shining down from the surface, five fathoms above us. 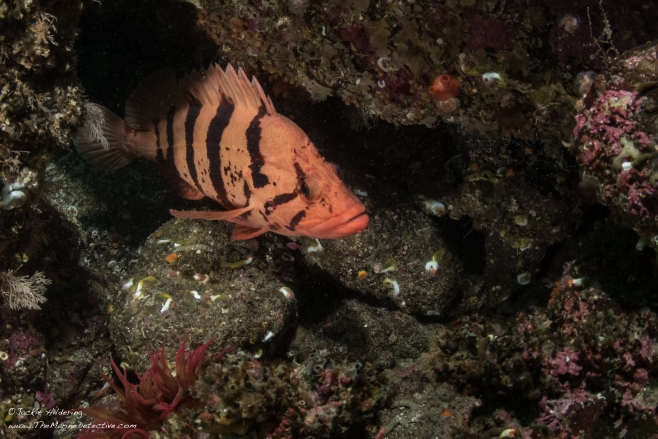 Tiger Rockfish – longevity can be 116 years WHEN given a chance. See the male Lingcod under the huge mass of eggs? He’s got a lot to protect!

And then . . . just as we were about to ascend, there he was again – the same Giant Pacific Octopus. 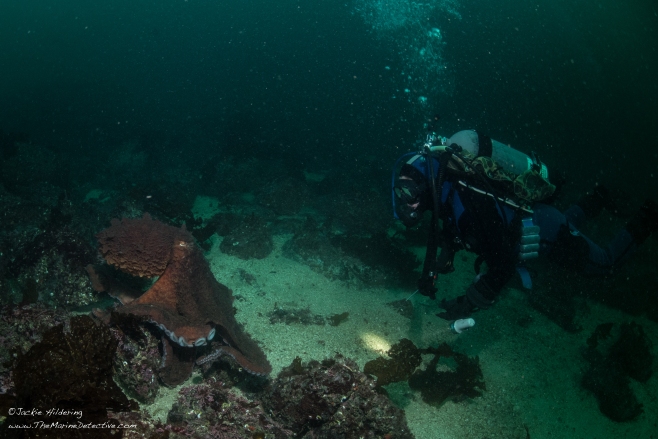 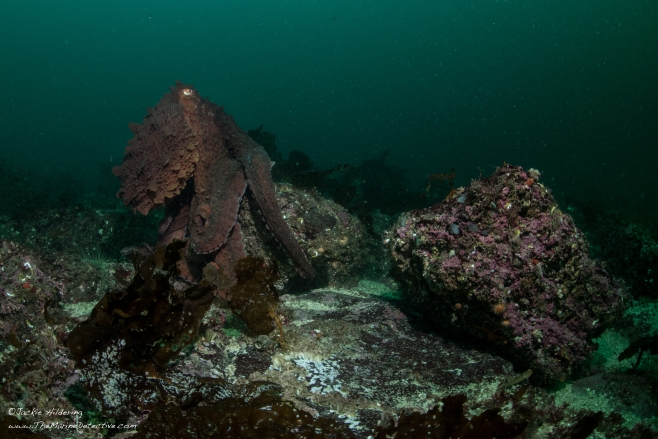 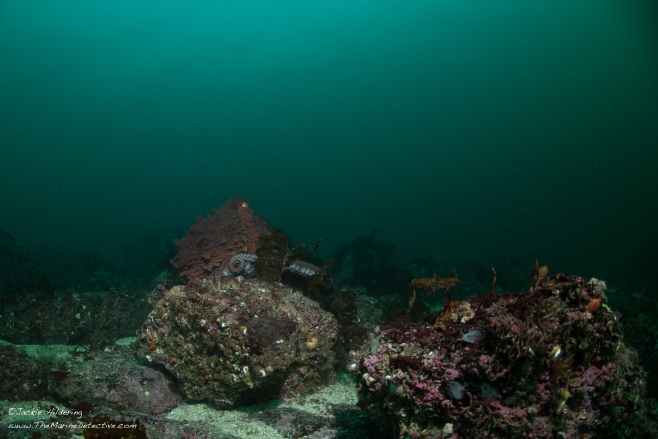 How I wish we could have stayed longer. We had to surface to a far less mysterious world, but with hearts full and so much to tell Cecelia, Jenny and Rosie. 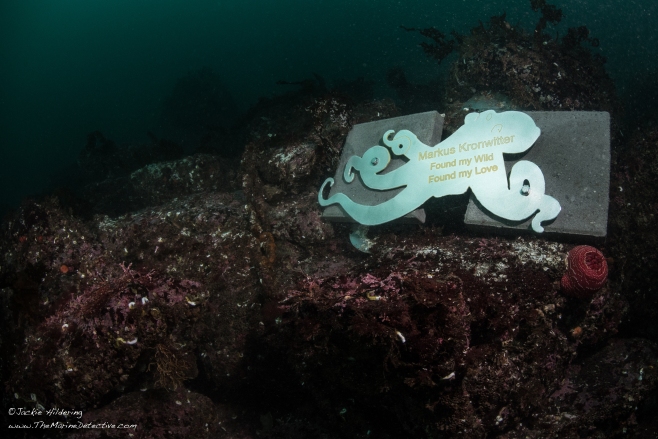 Image below is of the memorial 20 months later, October 2020. It has become part of the seascape and it appears a China Rockfish is living very near. 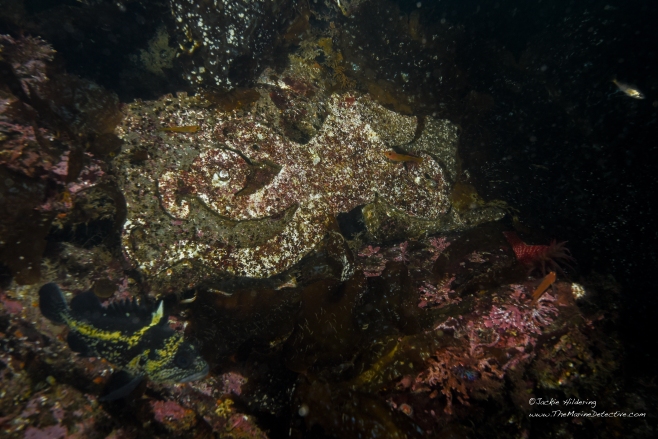 My Eulogy for Markus. 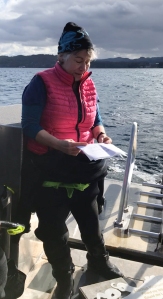 It’s my great honour to say a few words before we dive on Five Fathom Rock to position Markus’ memorial.

It’s been more than 3 years since Markus died. Cecelia, Jenny and Rosie you need the words and, even more, you need this place where your thoughts and feelings can be anchored.

In trying to find the words, I dared remember what it felt like to be around Markus. I don’t think that I know anyone else who was quite like him in knowing the right thing to do, no matter how hard it would be and no matter how many injustices he had suffered.

Markus was about making things better and standing up for what was right. He was a man of truth and science. He appeared unflinching in facing reality. He did not suffer fools. He saw through people with crystalline clarity. He walked his own path – in red “holely soles” and multi-coloured pants – and had the wisdom to stop to have Cecelia join to walk beside him.

He made hard decisions. 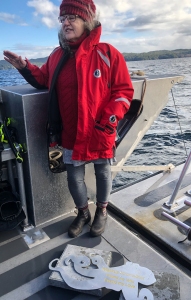 He fought to be here on northern Vancouver Island.

He fought for his girls.

He fought for our dive club.

He fought for the fishes, now flourishing beneath us.

He fought for his life.
[When diagnosed with cancer, he was told he had 2 years to live. He lived for 14 years post diagnosis].

And he has left an extraordinary legacy.

Part of this, is the legacy of Five Fathom Rock.

Markus fought for this to be a Rockfish Conservation Area so that the fish that live here might get a chance to grow bigger, reproduce more, and to thrive.

And there’s success. It’s so beautiful down there Rosie, Jenny and Cecelia. The fishes are thriving – there are clouds of rockfish and it’s so powerful to think that some, like the Tiger Rockfish, might get a chance to live to be more than 100-years-old.

If there were any place where I could picture Markus, it would be here darting around with yellow fins, fish-like himself. Clearly so at home . . . here.

His efforts for Five Fathom included trying to have a mooring here and his creativity was to use a big metal beer keg. It’s down there now, on the highest part of the reef , close to where there are 2 Wolf-Eels. It’s where we’ll attach the memorial.

And how perfect that this will happen at a time when the Lingcod fathers are protecting the next generation, standing guard, not suffering fools, making very clear when you’re trying to get too close without good intent. Fiercely fighting for the next generation, with an extraordinary sense of place.

He loved it here.

It’s impossible to forget him here.

Not that there is any possibility of forgetting Markus or what he stood for.

His legacy of course includes you Rosie, Jenny and Cecelia. He loved you so much and I can’t even imagine how hard he fought wanting to be here still to protect you, to make sure you would always be okay.

Jennifer and Rosie, you are fighters like your Papa Markus.

Jenny – I also think you have his sense of purpose.

Rosie  – I think you have his sense of place.

Cecelia – the love in your eyes makes clear how you carry Markus with you always. 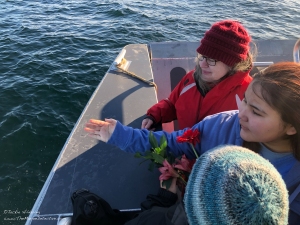 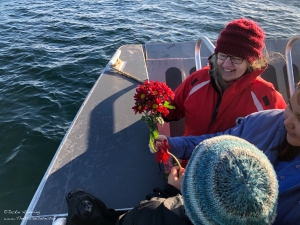 Compilation of photos and video below.