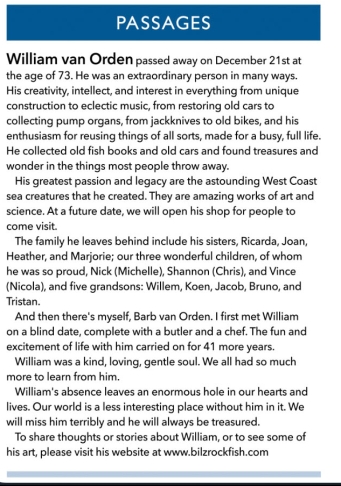 Update January 2022:
It is with a deep sense of loss and sympathy for all who loved him that I share that William van Orden has died. Gone is his gift to the world of great caring and creating so that more of us would respect the life off our coast.

As so beautifully expressed by Tiare Boyes: “The world has lost a bit of bioluminescence.”

To share your memories of this legend of a human, please fill in the form at this link so that the stories may live on and offer joy, comfort and direction  http://bilzrockfish.com (scroll down just a bit when you get to that page). You can share photos there too.

About the sea stars and so much more, I promise that I, and many others will continue you where left off.

Original post:
What on our blue planet is going on in this photo?! 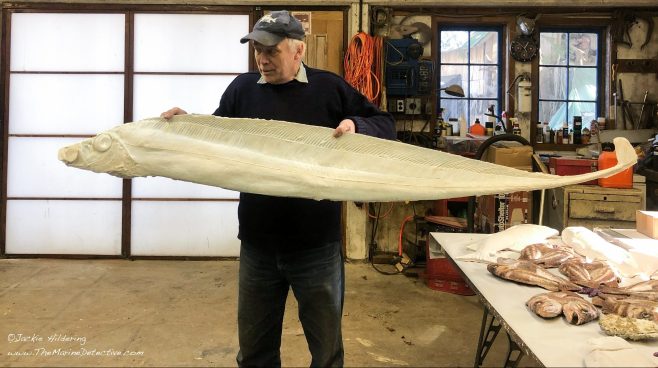 Well, this is William van Orden aka “Bilz Rockfish” of Quadra Island. Since 1995, he has been driven to make replicas of NE Pacific Ocean fish species and other marine life. It was my great fish-nerd joy today to spend some time with him and his wife Barb.

Above, William is holding the mold from the exact fish in the image below. This is the King-of-the-Salmon that died near Oak Bay on September 21st, 2017. For more on this remarkable species, see my blog item at this link which includes William’s rationale for why this fish should not be named as it has been.

By making molds of fish and marine invertebrates that have died as a result of bycatch or washing up like this, William can then make exact replicas for the purposes of education, conservation and art. Incredible care is taken to ensure that every detail is captured in the cast and that the painting is as accurate as possible for the species. 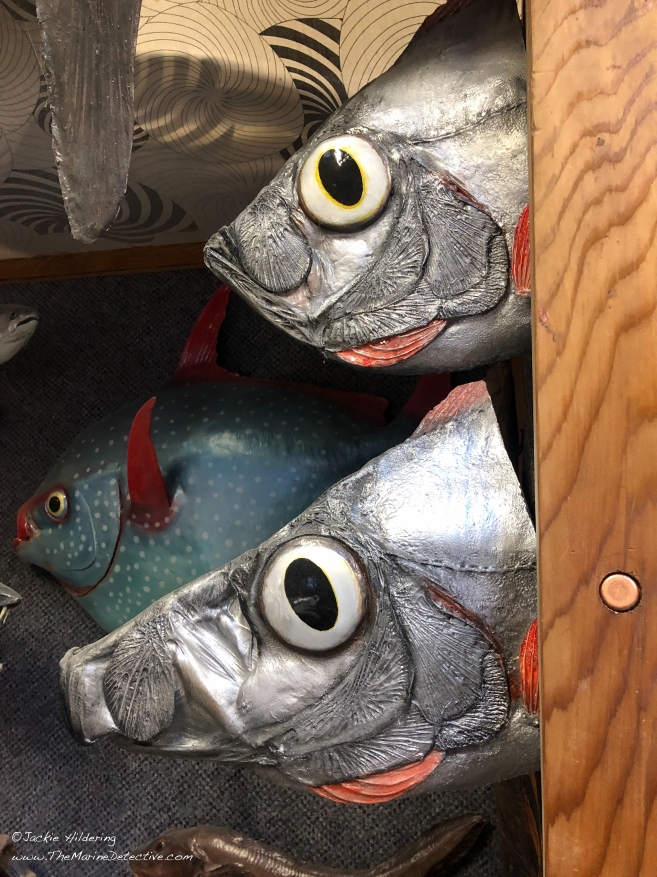 Replicas of the head of the same King-of-the-Salmon. As a result of this, I learned that the nose can push outward as you see by contrasting the top and bottom casts (from the same fish). Presumably this would be to hunt prey which include “variety of fishes, amphipods, copepods, euphusiids [krill species], fish larvae, polychaetes [bristle worms], squids and octopuses.” Source: Love, Dr. Milton. Certainly More Than You Want to Know about the Fishes of the Pacific Coast: A Postmodern Experience. The fish you see in the background is a 71 cm long Opah (Moonfish). These are fish species that belong in the NE Pacific Ocean but we so rarely get to see them and their awe-inspiring adaptations.

From the Bilz Rockfish website: “Every scale, pore and wrinkle is duplicated. The cast fish are then coloured with acrylic paints using an extensive collection of photos and notes. The quest is to create a permanent three-dimensional record of every fish [species] found along the Pacific coast. With over 400 different molds cluttering his shop, it would appear that the quest has turned into an obsession.”

Indeed, the detail is remarkable (as is his wonderful ichthyology obsession). For example, today I realized why Starry Flounder must be called STARRY Flounder. See all the tiny star patterns on the fish’s skin?

Cast of a 64 cm Starry Flounder.

I also learned something more about the “design” of female anglerfish.

Likely you know that anglerfish females have a lure that contains bacteria which create light (bioluminescence) to attract prey in the deep, dark depths that they dwell. This lure is marked “A” in my image below. What I learned from William is that the lure can be reeled in closer to the female’s mouth and  . . . as “A” is drawn inward, “B” gets longer i.e. “B” is the counterweight to the lure appendage!

Speaking of appendages, see the little male attached to the female anglerfish? The male bites onto the female and fuses with her. He gets her nutrients. She gets his sperm. I have included a National Geographic video clip at the end of this blog that shows a mated anglerfish pair.

Below, is a cast of 90 cm Rougheye Rockfish determined to be at least 150-years-old. The age was determined by scientists counting the annual growth bands on this individual’s otoliths (ear bones). Research has determined that the species can even get to be 205-years-old!

Other fish in this image are a Decorated Warbonnet (facing left below the Rougheye Rockfish) and, on the right, a deep-dwelling fish (a clue being the huge eyes to pick up on very low light) with the enchanting common name of Ox-eyed Oreo.

The fish in the image below is a cast of a 137 cm Longnose Lancetfish (who you calling long nose?!). The species is thought to most often be in the depths off our coast. However, William has found shallow dwelling species like sticklebacks and Pacific Spiny Lumpsuckers in the stomachs of individuals he has cast. This suggests that at least those individuals were in the shallows. An additional great quote by Dr. Milton Love is “Longnose Lancetfish are another species for which the term “little is known” fits like a snug shoe.”

137 cm long Longnose Lancetfish. To the left, a male Steelhead (spawning stage). To the right, the Opah (Moonfish). And below, a 10 cm Pacific Spiny Lumpsucker. See him/her?

I have wanted to see William’s workshop for a long time. We’ve been in communication over the years as we have just a few interests in common. 🙂 I have used some of his casts for educational purposes (e.g. his replicas of salmon species) and I might even have a few casts hanging near the shower. Hey! All the cool kids are doing it (at least we marine biology / diver types).

But of course, there is also solemness to seeing the replicas of these awe-inspiring marine neighbours. They are the result of animals who have died.

This struck me the most powerfully with what you see in the image below. These are Ochre Stars with Sea Star Wasting Syndrome, cast by William in an attempt to bring more awareness to the plight of the sea stars.

He had also made a cast a of the species most impacted by the Syndrome off our coast – the Sunflower Star. It made me clench my teeth and hold back tears, understanding fully why he made this replica. Because, it is conceivable that this could become the only way we see this species, once so common off our coast. For more on Sea Star Wasting Syndrome, please see this link.

Below, more images of Willam’s work and the promised video showing a mated anglerfish pair.

To contact William / Bilz Rockfish, click here. The ideal for rare fish finds (deceased) is that they be of use to science and be cast for the purposes of education and conservation.

Underside of a 51 cm Black Skate.

Close-up on the mold for the King-of-the-Salmon.

5 Responses to “For the Love of Fish – Bilz Rockfish”