That’s not usually a good conversation starter is it?

But, read on. It’s worth it! If you are fascinated by adaptations and the interconnectedness of species . . . even when it involves parasites.

These are Transparent Tunicates (aka Transparent Sea Squirts). They are not parasites. They are highly evolved animals with a primitive backbone. They take in food particles through one siphon in their strong “tunic” and expel waste through the other siphon. See the siphons? 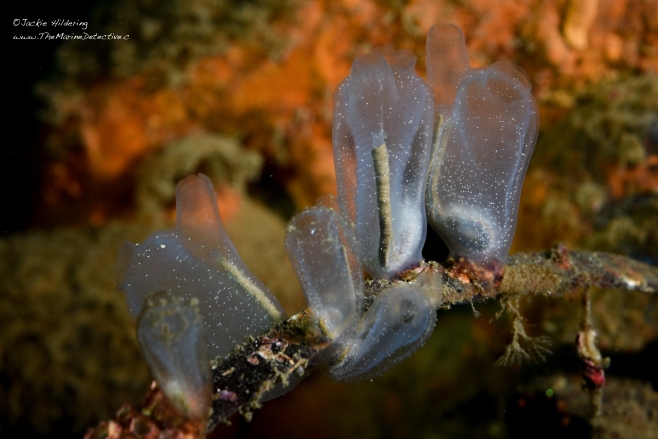 The dark you see here is the waste inside their rectums. Yep, they are filter feeders and clearly take in some sand too. What’s this then about parasites?

This species gets invaded by a wicked parasite (as opposed to all those gentle and meek parasites out there) . . . the Spotted Flatworm! This species of flatworm curls up, sneaks in through the tunicate’s branchial siphon, unrolls, eats the tunicate’s internal organs over 3 to 7 days and then moves on, leaving behind the empty tunic.

They are species specific parasites, apparently specializing in invading Transparent Tunicates. The following photos clearly show you the Spotted Flatworm presence there and the tunicates are now mere shells of their former selves.

All the internal organs are gone in the heavily invested individual in the photo below.

In having the privilege of learning even from individual animals by diving the same areas frequently. I recently saw the progression for individual Transparent Tunicates and the Spotted Flatworms that had invested them. The following photo is from March 1st, 2020. I’ve now added arrows to show the parasites. 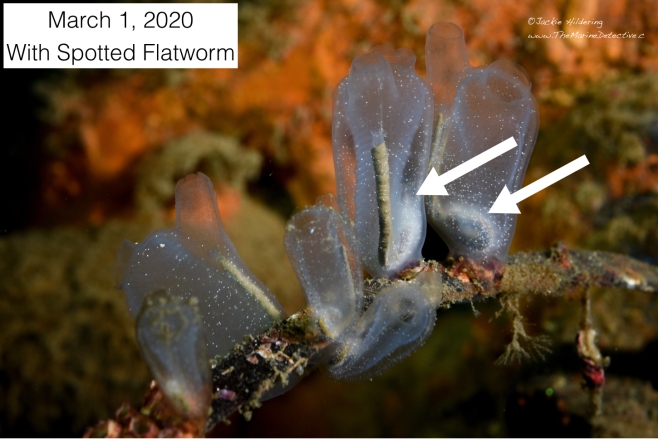 The following two photos show you reality  24 days later. The originally invested Transparent Tunicates are dead and the Spotted Flatworms have moved into their neighbours.

Below is another perspective on the same individuals. 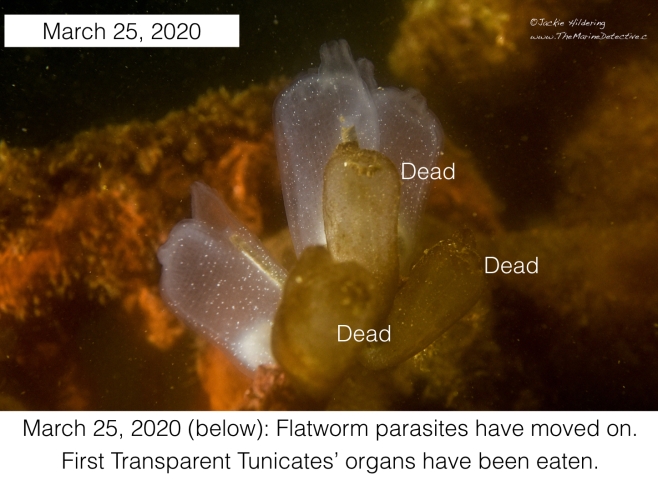 I truly hope that in these times where our own species is facing extreme challenges, that this information still creates awe, connection and respect for the lives of others. Maybe it’s more important than ever.

Wishing you health, resilience, and strength of community.

2 Responses to “Preoccupied with Parasites”